And so to Spain 🇪🇸Huelva and El Rocio

We plot the quickest route, avoiding the higher mountain ranges that often attract snow at this time of year. We have an awful lot of mileage to cover before we reach the top of France and the Eurotunnel at Calais. In addition, we have to work in the five day Vet’s appointment for the dog before we can cross the channel and not forgetting of course that every man AND his dog is going to want to exit stage left before Brexit on the 29th of March. I am not very confident that we will be offered an earlier crossing. We can but try. Paula’s funeral is on the 2nd of April.

We say a tearful goodbye to our friends and Manta Rota. I can’t even bear to look at Marion and Tony, having a massive emotional wobble as I leave my little seashell garden. Hope we’ll be back here sooner rather than later.

We cross the border into Spain over the big river bridge near Castro Marim and our first planned stop is Huelva. It’s only a slight deviation from our route and Mark really wants to see the Christopher Columbus boats as recommended by Kev and Annie. The Aire by the Museum is free. There are no services but there is a nice little cafe restaurant just off the Carpark. It’s a good stop. There is a prettier place up the hill near the University and Monastery in the trees if you prefer. Its only a whistle stop for us though so we just want convenience. It’s a scorcher of a day. Missing my beach already. 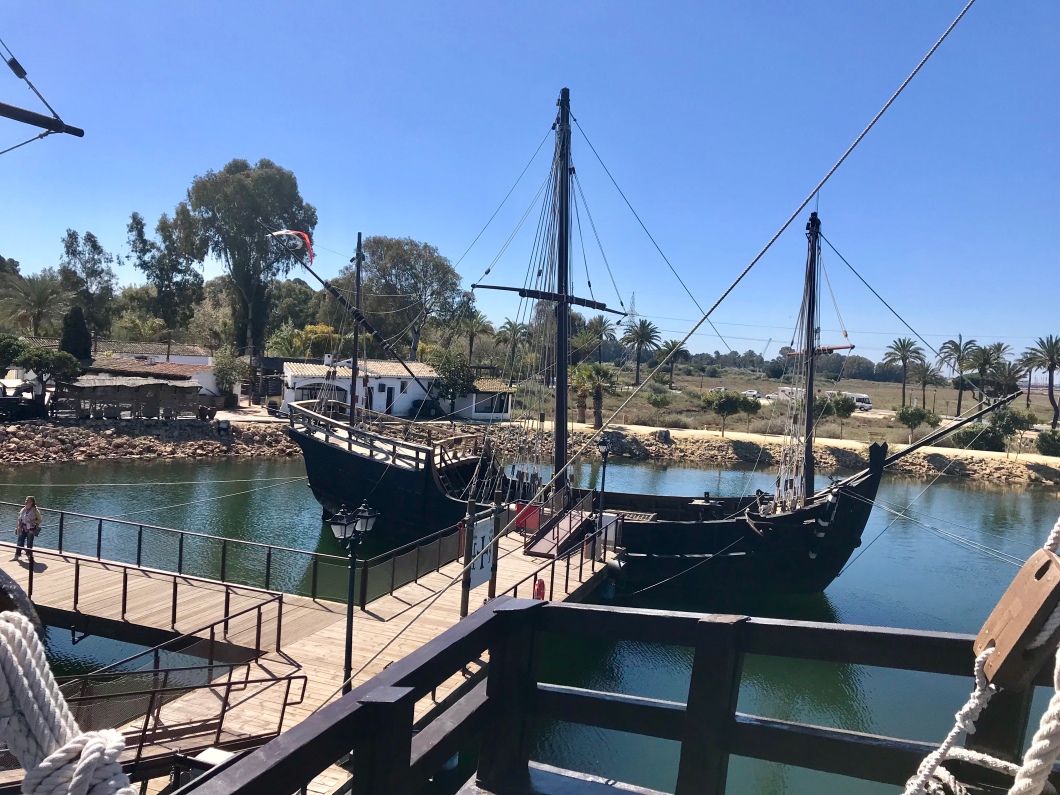 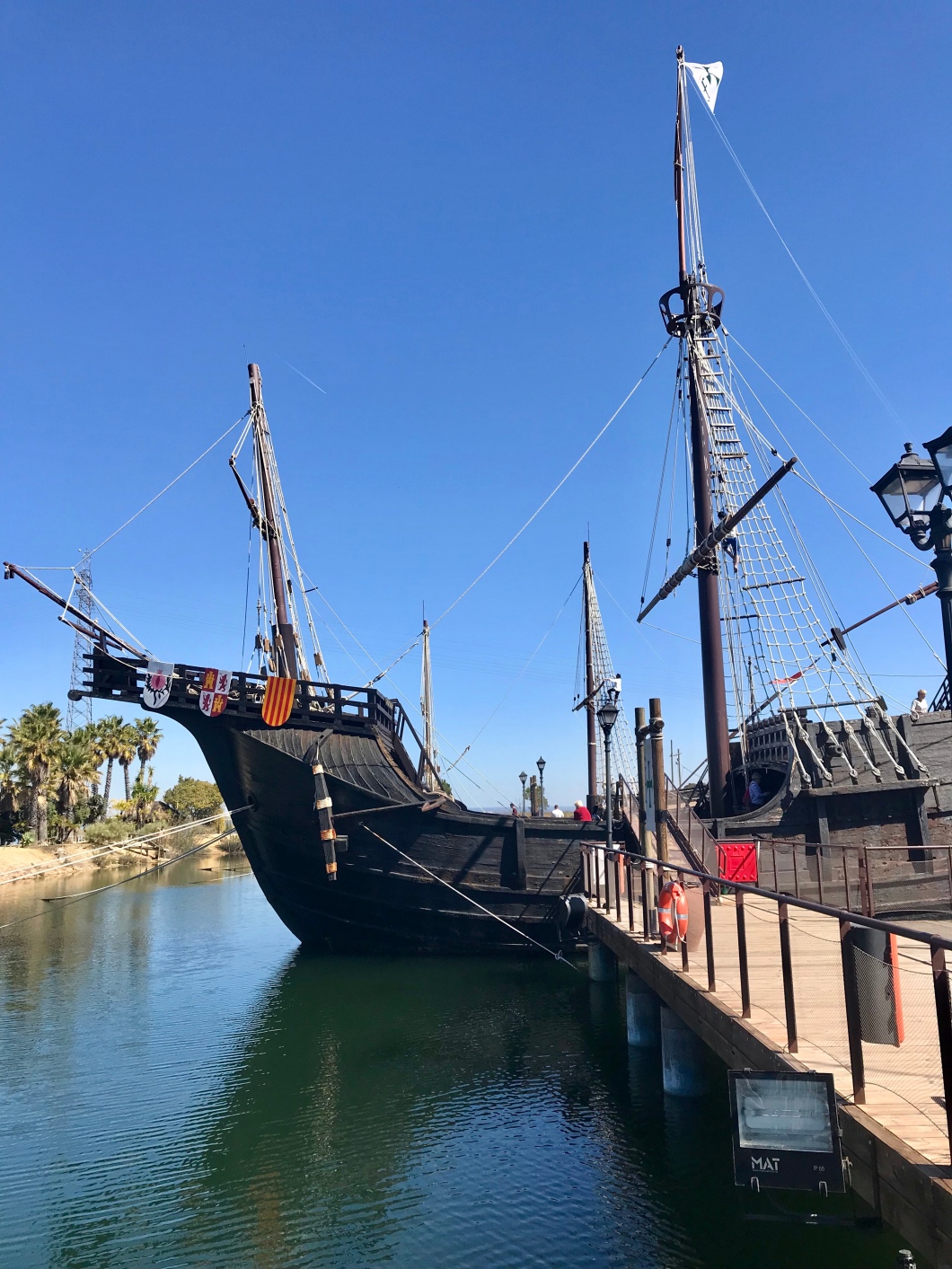 The boats are great. It’s really interesting, I’m so glad we came. The museum is good too, do watch the 20 minute film with English sub-titles. We get the bikes out and have a pedal around. There’s not much more to see without jumping on a bus into town so we decide to motor on to our next stop, El Rocio.

Not many people have heard of this strange and magical little town, right in the heart of old Andalusia. It’s been on my radar for a few years now. There are no tarmac roads, just sand tracks. It’s very ‘spit and sawdust ‘. Everyone gets around either on horseback or by some other means of horse drawn transport. You see ponies tied up everywhere, outside the bakery, supermarket, bar etc. Traditional dress is still worn by many. It is amazing with a capital A! There are a few free places to park overnight but the Police do move Motorhomers on if too many take advantage. The unwritten rule is don’t overstay your welcome. 48 hours max. We opt for the campsite on this occasion, Camping Aldea. It’s an ACSI site and the pitches are lovely. One of the better sites. The showers are the dogs after s hit, sticky day. It’s a short walk into the middle of town. I would just say, consider your footwear carefully if you visit this place. It’s damned hard work walking on sand and if you wear anything nice on your feet prepare to come back dusty and dirty! Everybody wears boots. Trust me, it’s for a good reason! I drag out the trusty Fairfax and Favors from hibernation. I refuse to be outbooted by a Spaniard!! The town sits on the edge of the Doñana National Park. The lagoon adjacent to town as we walk down the Main Street at sunset is a mass of beautiful pink flamingos. They look incredible in the pinky golden light. Double whammy! The park itself begins at the estuary of the Guadalquivir River and is Spain’s largest wildlife reserve. There are many rare birds including vultures to be seen out there. The Spanish Lynx still roams free. Organised tours run from El Rocio. It’s a wild place leading to a modern day Wild West town! Weekends are the best time to visit El Rocio. Friday night through to Sunday afternoon brings out the families after work, groups of young and old just socialising and the showboaters flaunting their majestic animals and horsemanship. It’s a fair old spectacle. They come from all the surrounding towns and villages. Mule trains, carriages full of guitar playing gringos, horse drawn bars, the works! It has to be seen to be believed. The shops here in town, aside from food, only sell all things horse related and traditional dress including the full flamenco get up. I am blown away by it all. The bars and restaurants have hitching rails outside for the horses to be tethered to and high tables for those not wishing to dismount. I am half expecting Clint Eastwood to come riding around the corner spitting baccy! I don’t think I’ve ever been anywhere more atmospheric. It’s just fantastic!! 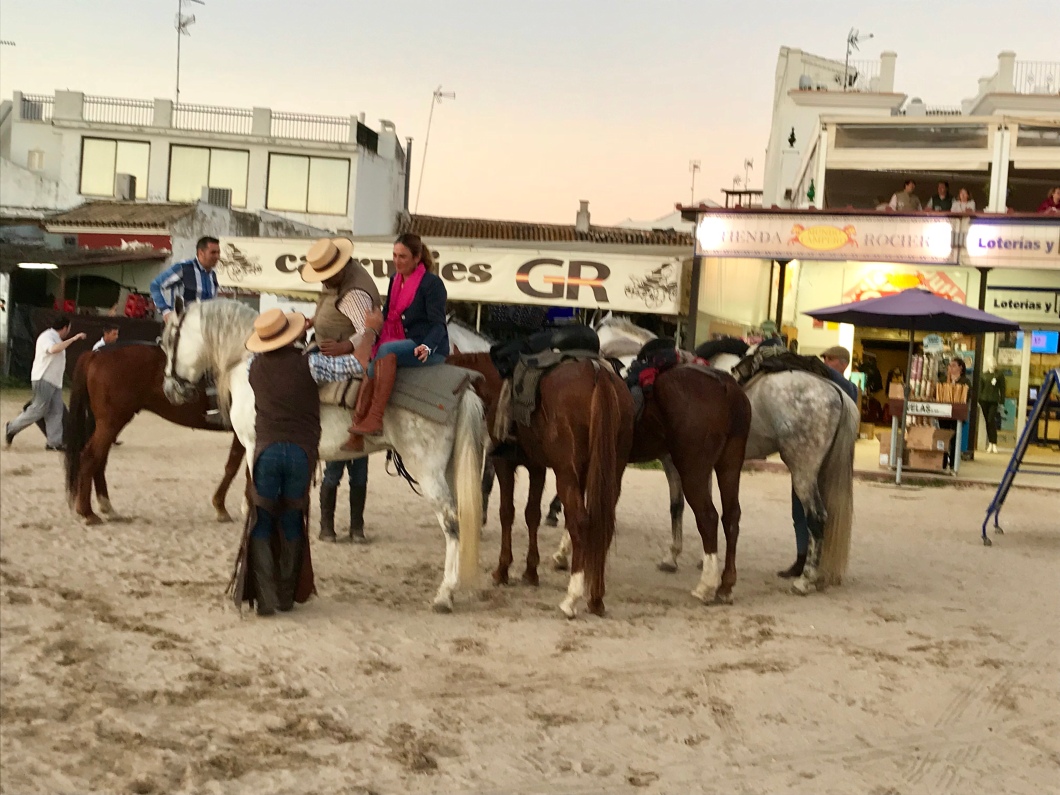 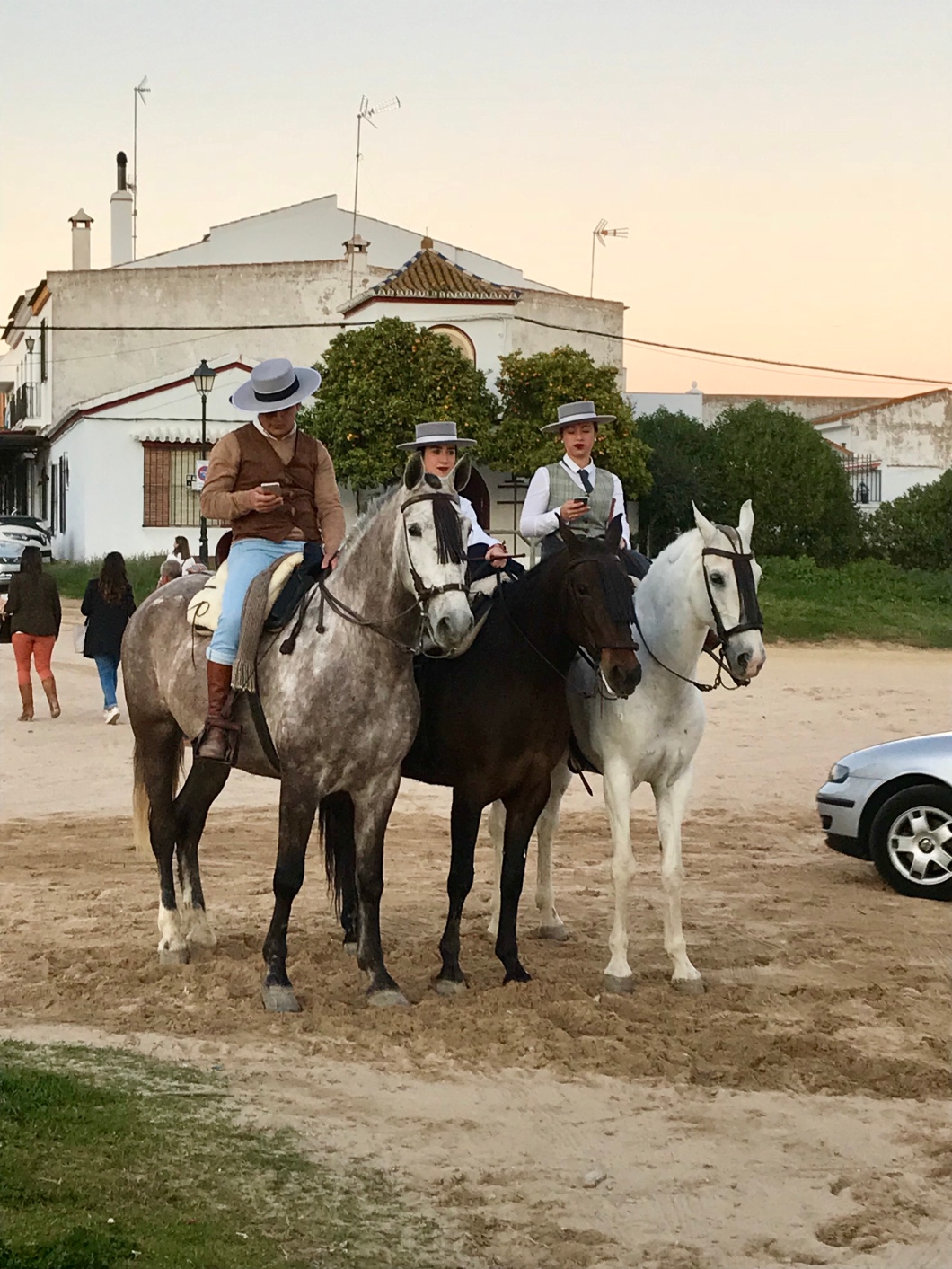 The white Church in the main square is huge and very impressive. Nuestra Senora del Rocio.

It’s home to a famous 13th Century wooden carved statue, the Virgen del Rocio. There is a separate hall full of candles which are lit at night as people leave Church. Each year almost a million pilgrims apparently flock to the Romeria Festival of the Pentecost in El Rocio. The statue is paraded through the streets. Throughout the town there are 90 small churches scattered, each representing the houses of the various religious brotherhoods around Spain. They stand empty all year round until May/June when the crowds arrive. It’s one of the biggest religious festivals in the Country now, despite El Rocio being one of its smallest towns. Again the pilgrims travel here on horseback with their luggage loaded onto ox drawn carts and mule trains over miles of rough terrain of the National Park. They camp out in the pine forests. Proper cowboy stuff!

So very glad we got to see this wonderful part of the world. That is a memory to treasure for sure. On Monday morning we are up at first light to get all our chores done before we must depart. On the road again then. We have around 220 miles to do today before our next stop. Sorry we are having to bypass Seville, my favourite Spanish City, but needs must. Forward Muchachas!

Join us next time in Caceres. One for all you Game of Thrones fans. Hope you enjoyed the Western!

Bye for now dear friends. Love and Best to all ❤️