Oh my days, I’m so happy to be going back to this heavenly place! Can’t really explain why, there’s not an awful lot here to be fair but I just love it. It’s rugged, wild and unspoilt and just downright beautiful. 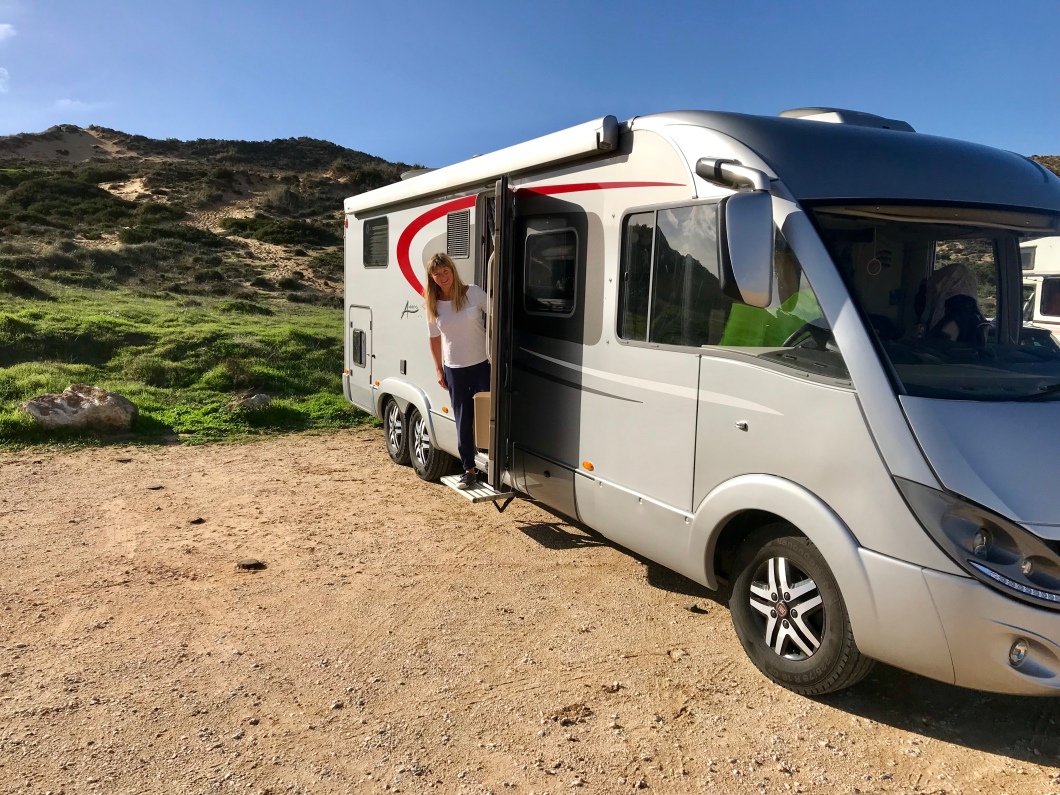 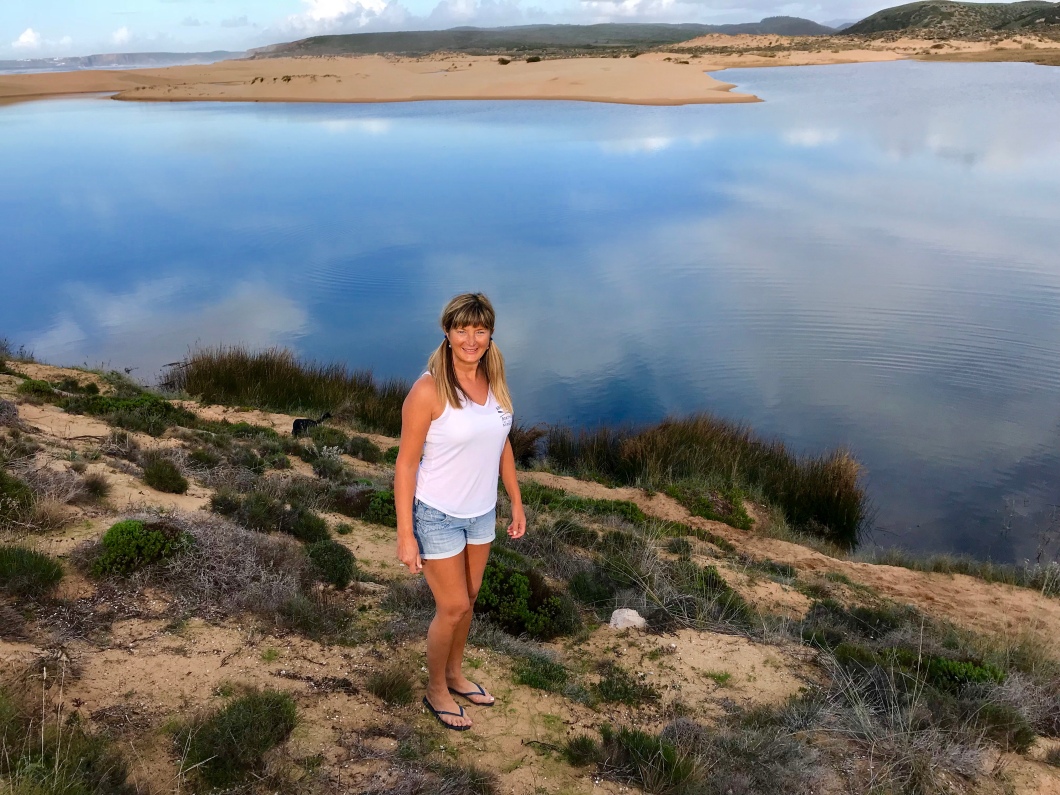 Parking is between the villages of Bordeira and Carrapeteira amongst the huge sand dunes at Bordeira Praia. There is also further parking up the hill in various places along the craggy cliff tops with amazing views of the Atlantic. At your own peril if it’s windy. You’re almost on the farthest most westerly point in Europe, those Atlantic winds can be savage at this time of year. We prefer to tuck in down by the lagoon where it’s sheltered. There are no services whatsoever here so come prepared. This is just wild camping at its absolute best, no light pollution at night, I have never seen such skies in my life. It’s a super moon too tomorrow so quite excited about doing a bit of star gazing in the dunes. Camping behaviour is not tolerated here. That basically means you can stay but no mats out, shoes left out, awnings, etc etc. The GNR have really had to clamp down along this coastline as people have been taking the mick and staying put for months, pegging washing out, setting up chairs and tables and generally being a nuisance and making a mess. Lots of hippy types tend to settle if allowed to do so which can be a blight on the landscape. This is a nature reserve after all and we should never outstay our welcome. The Parque Natural do Sudoeste Alentejano e Costa Vincenta. It is not a campsite!

The beach is a ten minute walk around the lagoon on the paths etched into the dune or a short swim/paddle board away. It’s a huge expanse of forever shifting sand, it looks like the desert except for the sparkling blue Oasis of the Atlantic Ocean in the backdrop. It’s very popular with kite surfers. There are stacks of fish in the lagoon. I have never seen anyone catch a thing, they are obviously too clever! Many birdwatchers come here to catch a glimpse of the Bonelli’s Eagle which is resident in these parts. We saw them last year but no sightings this time.

This place is just stunning! Dylan goes batshit crazy when he gets on the beach, he just runs and runs. The lagoon is safe for him to swim. He’s one happy hound! 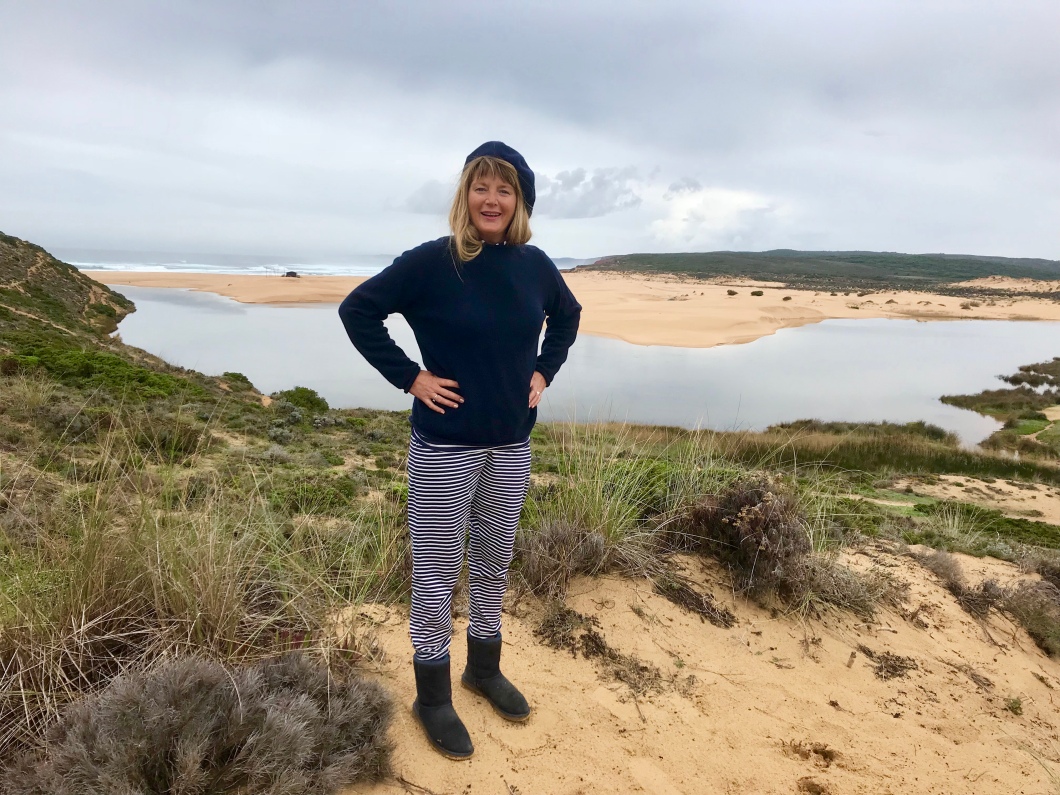 Sunsets are special. You’re right on the west coast! 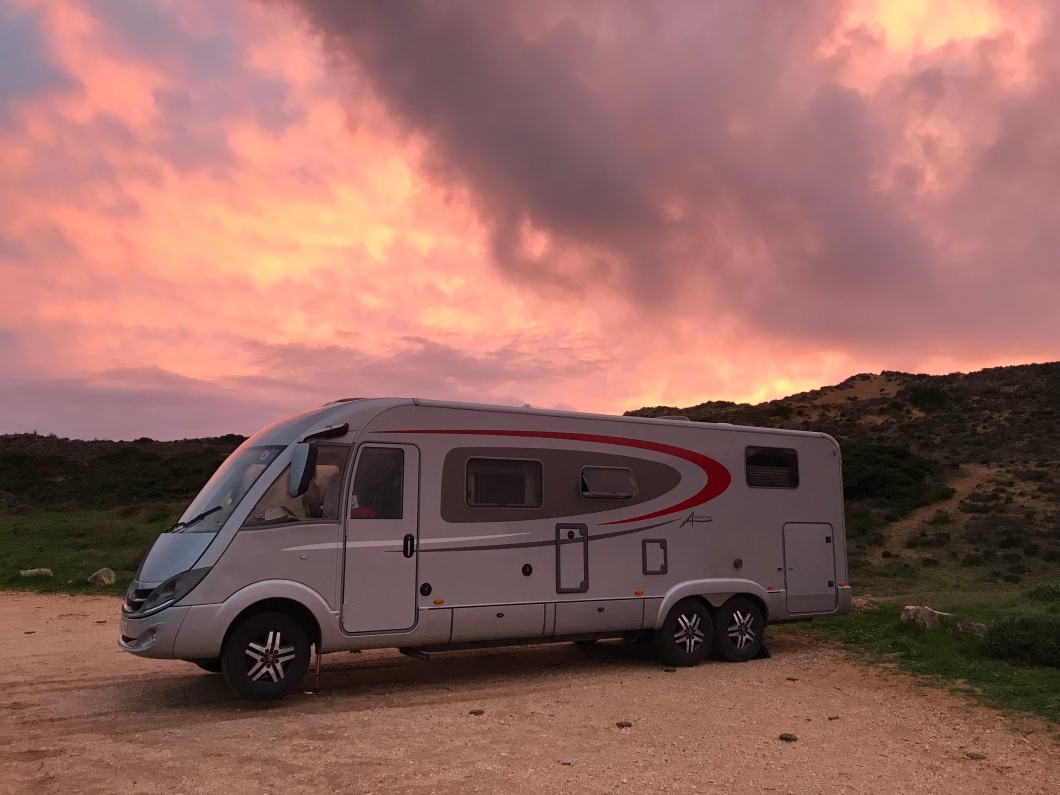 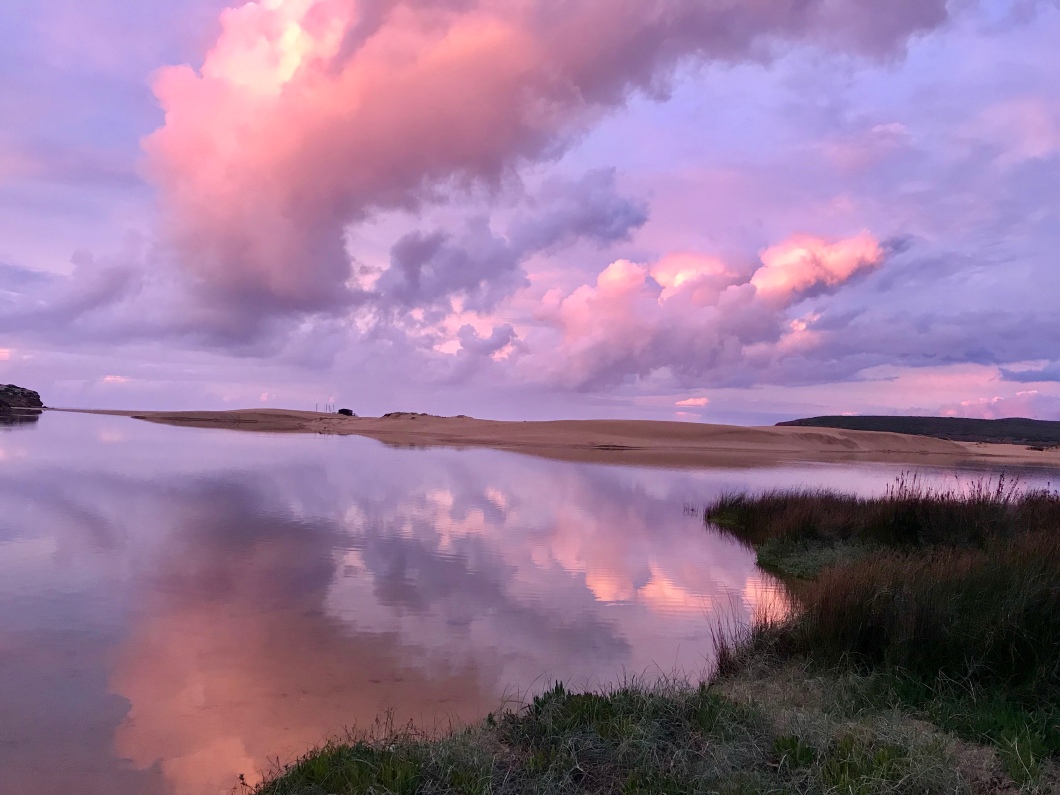 The skies blaze red and gold. The lake turns pink!

Carrapeteira village is a short cycle ride away. It’s very low key but pretty. The old village wash house is still in use on the hill at the side of the road. There are a couple of spots to eat in the square. The best one was closed for refurbishment. I hope it reopens, their burgers were legendary! There is a Museum at the top of town if you can brave the steep walk and the little white church is delightful with spectacular views over to the sea. 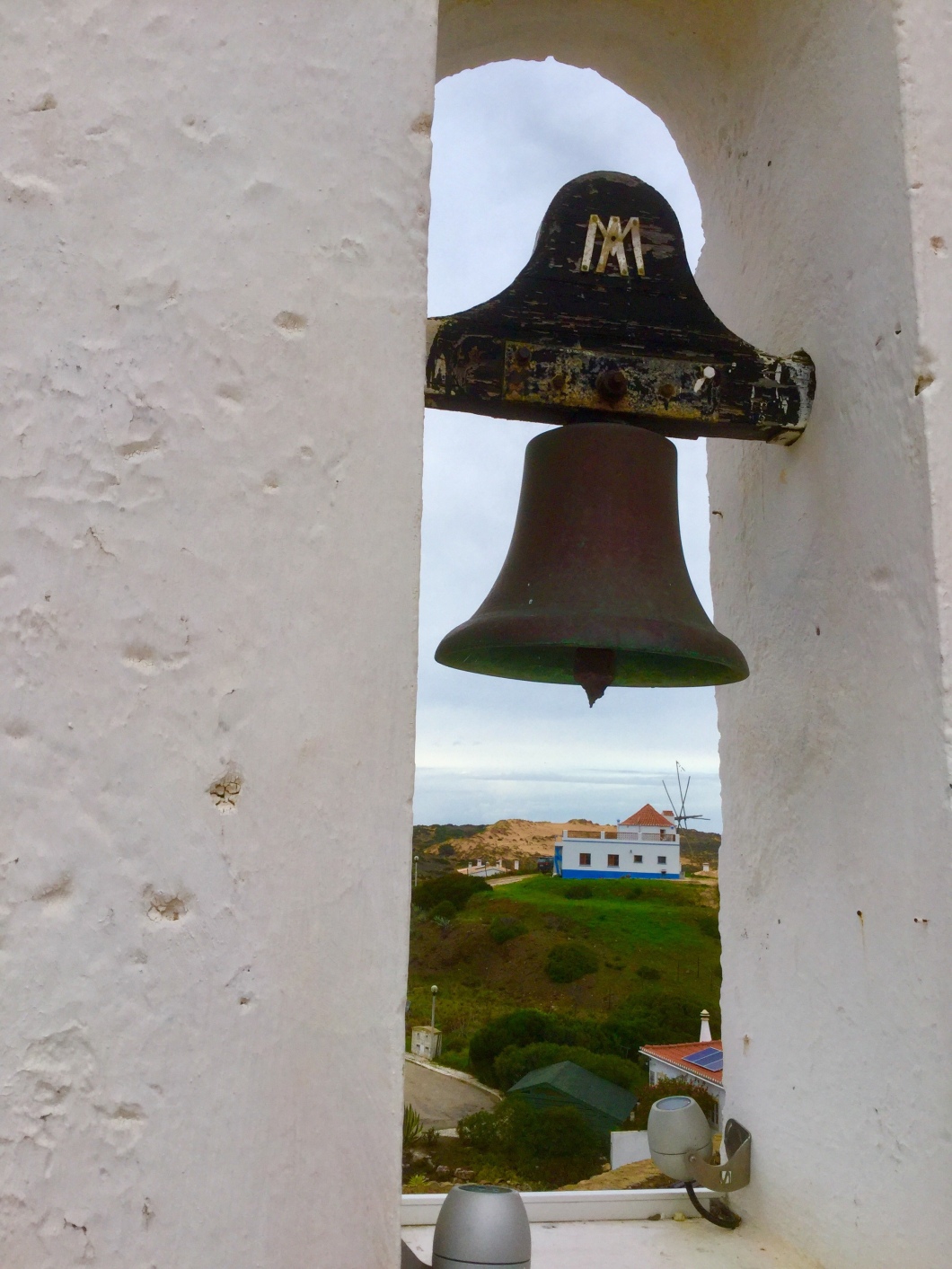 A couple of miles south is the gorgeous expanse of white sandy surf beach of Praia do Amado. It’s a bit of a bumpy road in but fine if you take it steady and you can wild camp there too. Be prepared to share with the Hippies though. They seem to have taken root!!

After several wonderful nights at Carrapeteira, we are forced to move on as our leisure battery dies overnight. The weak sunshine simply isn’t putting enough into the solar panel to sustain us any longer so we need to go for a drive to charge things up. The weather has turned a bit cloudy so it’s no massive loss. We head to Sagres. Intermarche there has a laundry so we can kill two birds with one stone, do the washing while we shop. It also has a Motorhome dump and fill point. They are very geared up for Motorhomers in this lovely Country. Unfortunately when we arrive, it’s closed for stocktake and the washing machines are out of order. Bugger! That puts a different spin on things, we really fancied a few nights at Sagres but we need supplies. Not a lot we can do. After a brief debate, it doesn’t take much to decide, let’s go back to Figueira! It’s only a short drive down the N125 and we loved it there last year. Come on then, it’s a plan, time to settle on a site for a bit!

Catch up with you later chums. Hope you enjoyed Carrapeteira! Next stop Figueira! Lots of love to you all, hope your festivities are in full swing back at home. TTFN ❤️