We fancied coming here last year after our travelling pals, Maggs and Maria and Bruce all raved about it. It’s on our route just about this year so we’ve decided to have a little look. The main feature we are interested in is The Convento do Cristo, the former headquarters of the Order of the Knights Templar. Mark is big into that kind of thing. He has a kindle full of books on the subject. It towers above the old quarter of Tomar and can be seen for miles before you get here. It was built in 1190, it’s now a UNESCO World Heritage Site and is classed as one of Portugal’s most important historic buildings. It is absolutely enormous! I’m quite surprised I have to admit. 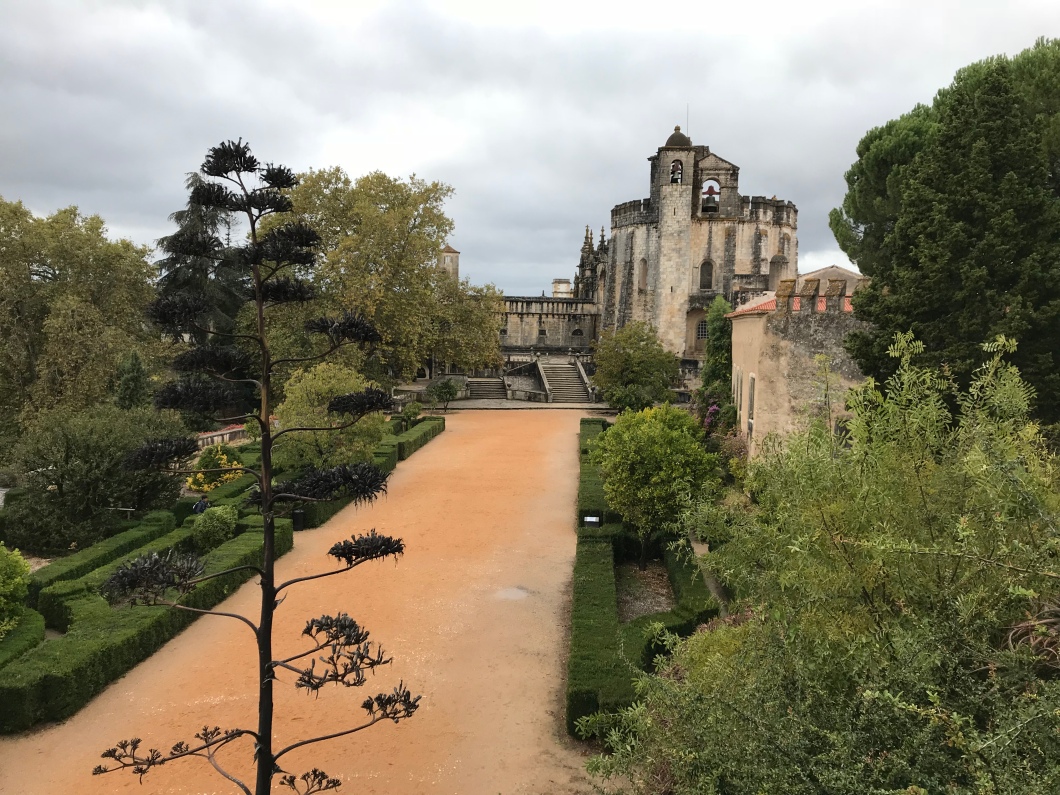 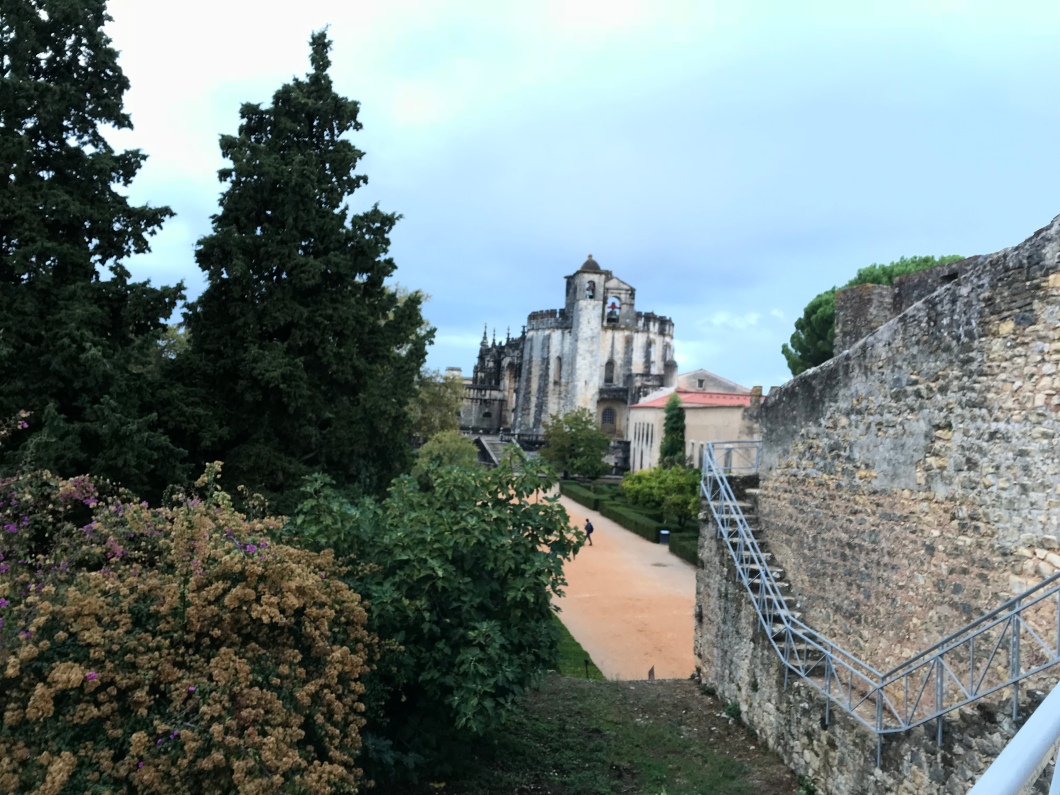 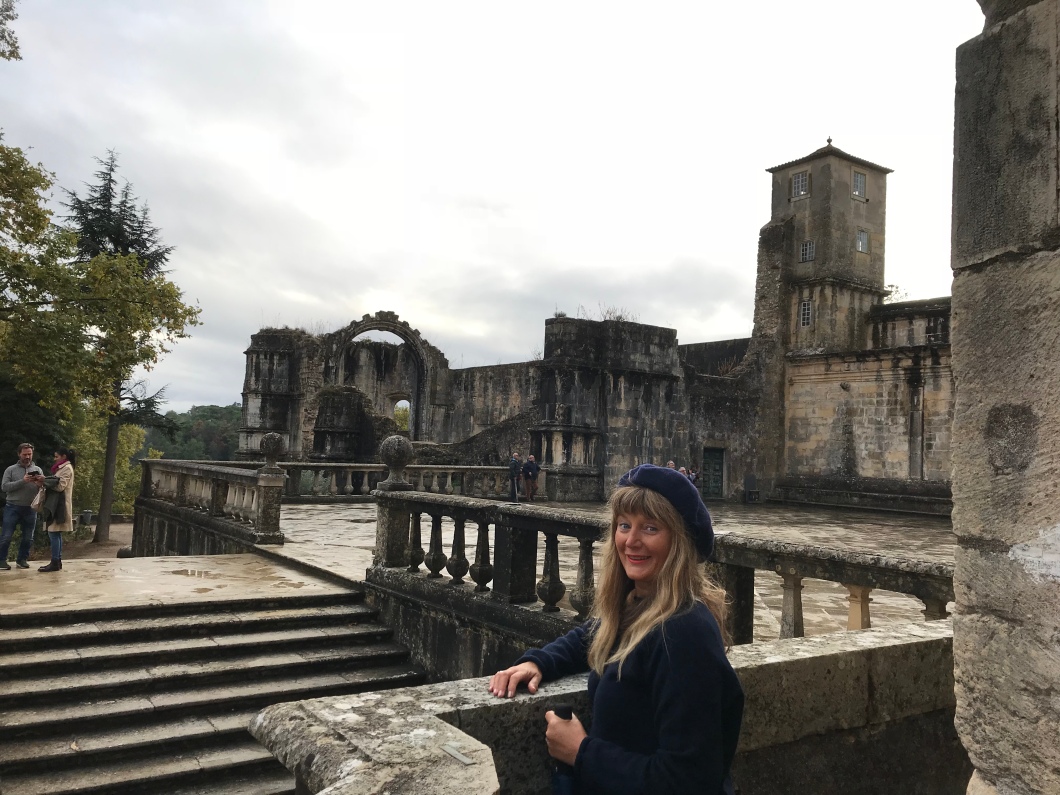 It’s €6 to get in. Well worth it as you get a guided tour in English. We picked oranges and lemons growing wild as we walked around. The gardens are amazing, ablaze with red and gold Autumn colours. 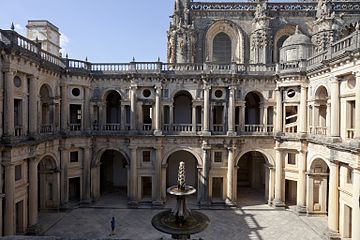 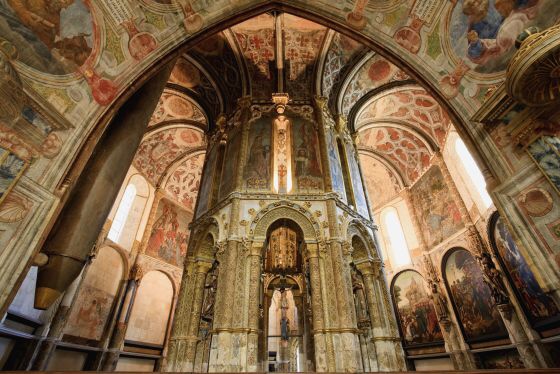 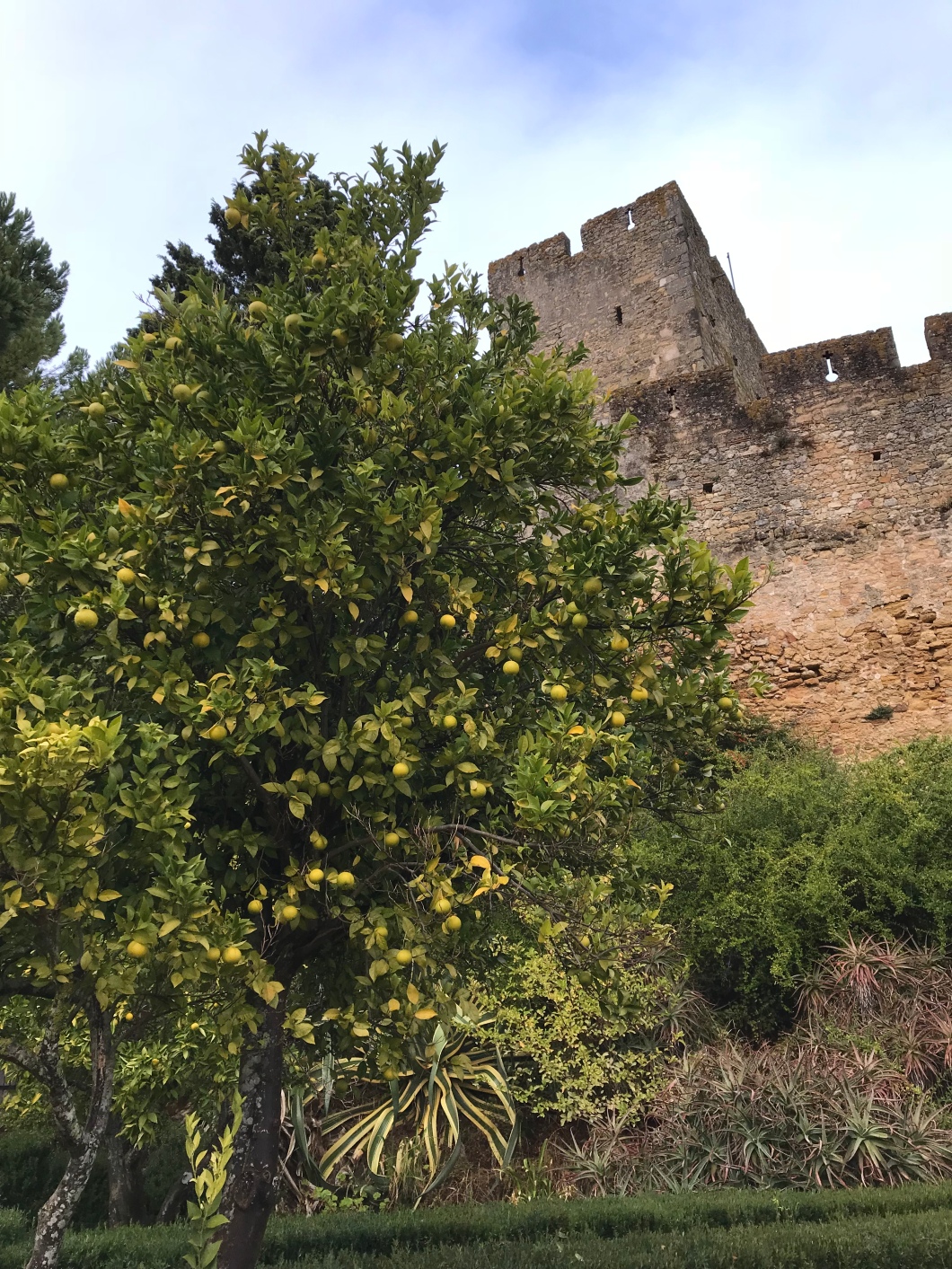 Tomar itself sits on the banks of the Rio Nabao. It’s a charming little town. It has a very attractive ancient quarter with a maize of cobbled streets leading from the main square, the Praça da República. Around the square are a ring of handsome seventeenth century buildings including the old town hall and a pretty church with an octagonal bell tower. Do yourself a favour and don’t wear heels! Those cobbles are a bitch! 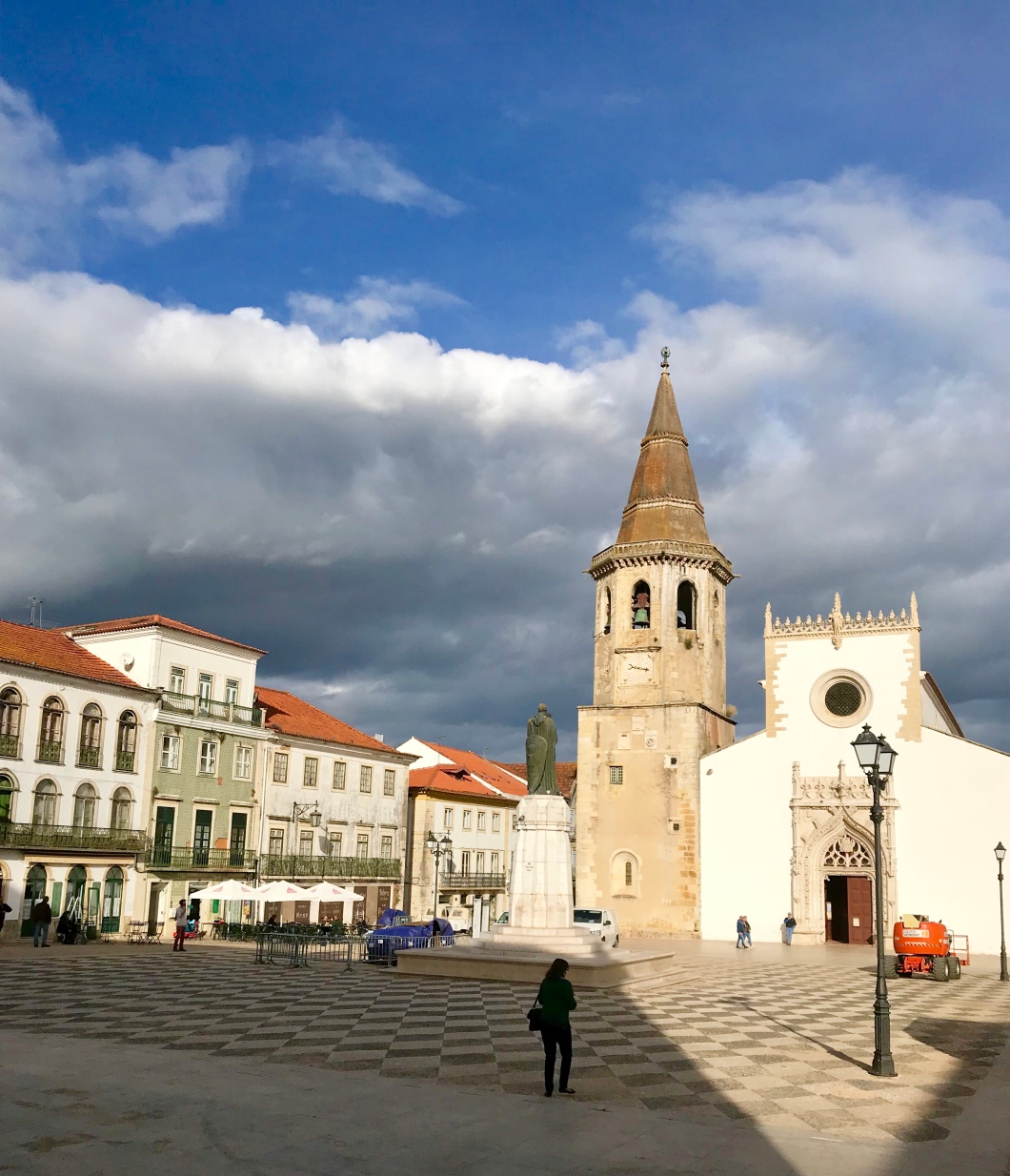 On the second day we were here, the square was cordoned off as they were shooting a film about the Light of Fatima. Some big Hollywood names are here apparently. Harvey Keitel and Sonia Braga. We watched a bit of it, it was really interesting. The Miracle of Fatima or The Miracle of the Sun happened in 1917 when three shepherd children in the nearby town of Fatima allegedly encountered the Virgin Mary whilst tending their sheep. It is said the sun broke through the dark clouds and shone multicoloured light on Fatima as if through stained glass.

The guide book has recommended we have a drink at Cafe Paraiso. It’s a big place with marble pillars and serves everything from coffee to Cocktails. Well if the book insists! It’s all trimmed up for Halloween. A lot of the film and lighting crew are hanging around, it’s a good atmosphere. The travel bible also says we should eat at either Tabuleiro in town or A Bela Vista on the old bridge by the river.,They both serve traditional Tomar dishes Cabrito (roasted kid), Arroz de Peixe, a tasty rice dish with fish and prawns and Leitao which is suckling Pig. Dining out tonight. Can’t wait!

So, as I’ve mentioned, it’s Halloween. I’ve trimmed the van up and carved my pumpkin. I’m going to make a Portuguese Grao, a kind of spicy chickpea stew, using up the Pumpkin and of course, some chickpeas. I may give it a twist and add rabbit. Lamb works too, minced preferably, or the Portuguese sometimes add Bacalhau, their traditional salted cod. The smell of it makes me heave so we won’t be eating that stuff any time soon. The meat needs to be cooked down in the slow cooker for about 3 hours with a bit of stock, chicken oxo or lamb depending on what meat you want to use, work perfectly. I always make it with a slug of wine as you may have noticed!! Add a couple of bay leaves too. Once it has started to tenderise, throw in some chopped tomatoes, be generous, the chopped pumpkin, a tin of chickpeas, a tablespoon of freshly ground cumin seeds, two tablespoons of dried green lentils, plenty of crushed garlic, go on, it’ll keep the vampires at bay or at least stop you catching cold, a good pinch of sea salt, some chopped 🌶 chillies according to taste and a thumb sized piece of grated ginger. I also put a couple of handfuls of spinach in there. Cook it slowly until it’s rich and thick. The longer the better. Stir in some roasted sliced onion which has browned and started to go crispy and a bunch of chopped coriander at the end. Serve with basmati rice and toasted pittas or flat bread. Delish. Saving ours until tomorrow as it’s spooky date night tonight!!

The weather is pretty rubbish. It’s flipping cold too. We have to tog up Derbyshire style to go out. The kids back home sent us a lovely pic of their trick or treat get up. Cuties or what!!

We had a lovely dinner at Tabuleiro It was a great family atmosphere with excellent food and wine and very good service. Reasonably priced too. As we walked home we caught the end of the Halloween parade coming over the bridge. Very enjoyable.

When we get up next morning, we recognise a van parked opposite and it’s Ben and Faye, some lovely fellow Motorhomers we met last year. Small world! It’s lovely to see them again.

This town offers Motorhomers a free Aire with toilets, water and grey/black dump. It’s a former campsite and is only a 2 minute walk into the centre. How amazing is that? Thanks Tomar. Be warned though, follow the Camper Contact co ordinates until you reach town then follow the blue auto caravanas signs as they’ve changed the road layout.

Really enjoyed this place. Did a bit of shopping, there are a couple of nice little boutiques and shoe shops and the prices are ridiculously cheap. We’ve had a free stay for 4 nights so we always make sure we put something into the local economy, it’s only fair.

Would like to be here for their Festa dos Tabuleiros held every four years. It’s a really big deal in Portugal.

As we leave town, we spy a big Intermarche Supermarket so we pull in to stock up before we hit the motorway. Thank goodness we did. Mark noticed one of the wheels didn’t look right. Sure enough when he tested the tyre pressure we had a puncture. What a bummer. That could have resulted in a nasty blow out. Thank you God 🙏. What the chuff do we do now then? Do we call our breakdown company? No, Mark decides to have a go himself. He hunts in the lockers for the jack. I keep my mouth firmly shut at this point as when he tells me what it looks like I remember I took it out and put it in the shed back home. If I don’t know what it is, it doesn’t come. More room for shoes. Oops 😬! Luckily we have an automatic levelling system to lift the van so it’s no big issue. Phew, got away lightly there!! We do carry a spare wheel so my boy had us sorted and away in no time. Crisis over and on the road again.

We’re going to head to the Coast now. I need to see the sea and Dylan is missing his beach. We need to charge everything up and do some laundry too. Off to Peniche via Obidos.

I’ll be in touch again when we land my lovelies. Will say a Portuguese Adious and Bom Dia for now. Hope you enjoyed your Halloween festivities. Keep smiling kids! Much love ❤️