It’s been a while since I posted my lovely readers. The stonking Summer has finally come to an end and our work in the New Forest is done. We said goodbye to all our pals at Roundhill and headed back to Bakewell to catch up with family and sort the mundane things. Dentist, Vet, Hairdressers etc. We have both missed our forest friends, the two legged kind and the four. We have wonderful memories of the beautiful sunsets, the smell of barbecues and the sight of the ponies coming down to the pond at sunrise to drink. It’s been a great experience and we hope to return next season.

Our delightful sat nav had to have her usual little joke as we left Hampshire after a busy day on site. She pulled us off the Motorway, allegedly due to traffic congestion and took us right through the middle of Romsey and Marlborough. Both very beautiful, both twisty and butt clenchingly narrow. We will definitely go back to explore. Most certainly not in a 9 meter Motorhome!! My nerves were shattered!

The temperature immediately drops down about 5 degrees as you cross the border into Derbyshire. It feels very northern!! Still, it’s a beautiful place to call home and it’s always great to see our people. The kids have all grown so much over Summer. Caught up with my old work team over a lunch at Simply Thai in Buxton. It was good to chat. Strangely, I do miss my old job and indeed my workmates but not the related stress. Managed to see some of the girls too. Hope to catch the rest of the gang before we depart the UK and continue our travels in October. Got reacquainted with Bakewell Pudding, my firm favourite!

We try once a year to squeeze in a camping trip with our crazy VW camper vanning buddies, the Barrass’s. We did Gower Peninsula and Pembrokeshire last year. It was fantastic despite an ordeal being stranded on Freshwater West Beach during Storm Aileen. We didn’t see the red flags flying on our approach, signalling live ammunition training at Castlemartin Army base , due to the driving rain. We were trapped for two nights as the roads in and out were closed. You seriously couldn’t write it. We could feel the ground shaking and see the scuds exploding on the hillside at night. We had to turn the music up to drown out the ack ack of machine gun fire! Funny but scary. During the day the little award winning beach street food Cafe Mor was still open for business as usual. Their legendary lobster rolls with Welsh black butter and seaweed ketchup are to die for (we seriously thought we were going to at one point!!). The winds howled and the waves crashed. Much Gin was consumed!! A proper adventure! Wales never fails to delight. It’s such a beautiful part of the world. Sea meets moody mountains, wild and wonderful. We showed Janine and Graeme Rhossili – Pitton Cross Campsite is open all year round and has the most amazing walks along the Gower Coastal Path. Three Cliffs Bay and its breathtaking views. Laugharne, Dylan Thomas’s writing shed and atmospheric castle. Tenby’s pretty coloured houses and spectacular beaches and Skrinkle Haven with its church door rock formations and secret cove. They absolutely adored it. How could you not. We finished off that trip with a night at Tintern Abbey and a meal at The Anchor, a former cider press. We arrived just as Hello Magazine and TV cameras were setting up to catch a celebrity wedding taking place in the Abbey. What a setting! We did try to crash the Uber posh reception later after copious amounts of cider but didn’t succeed sadly. My Claire’s Accessories plastic tiara fooled no one dammit. 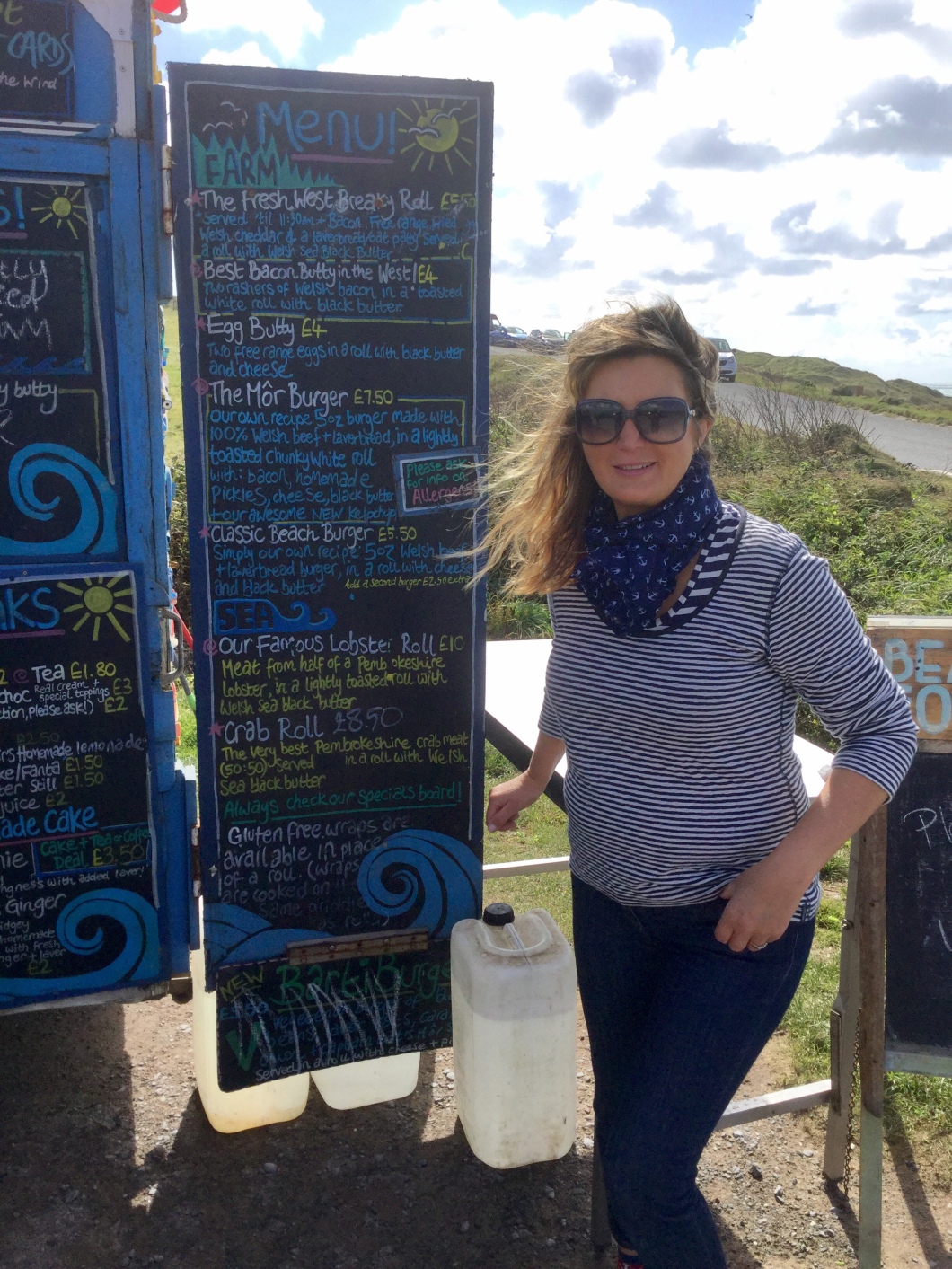 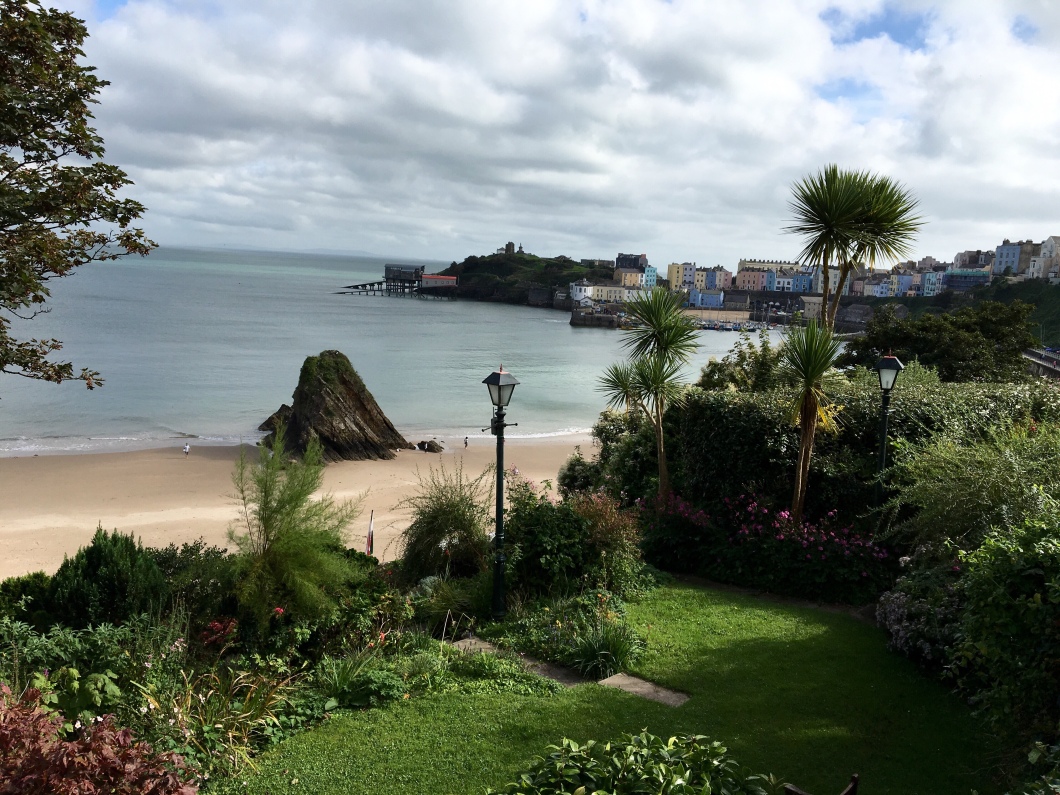 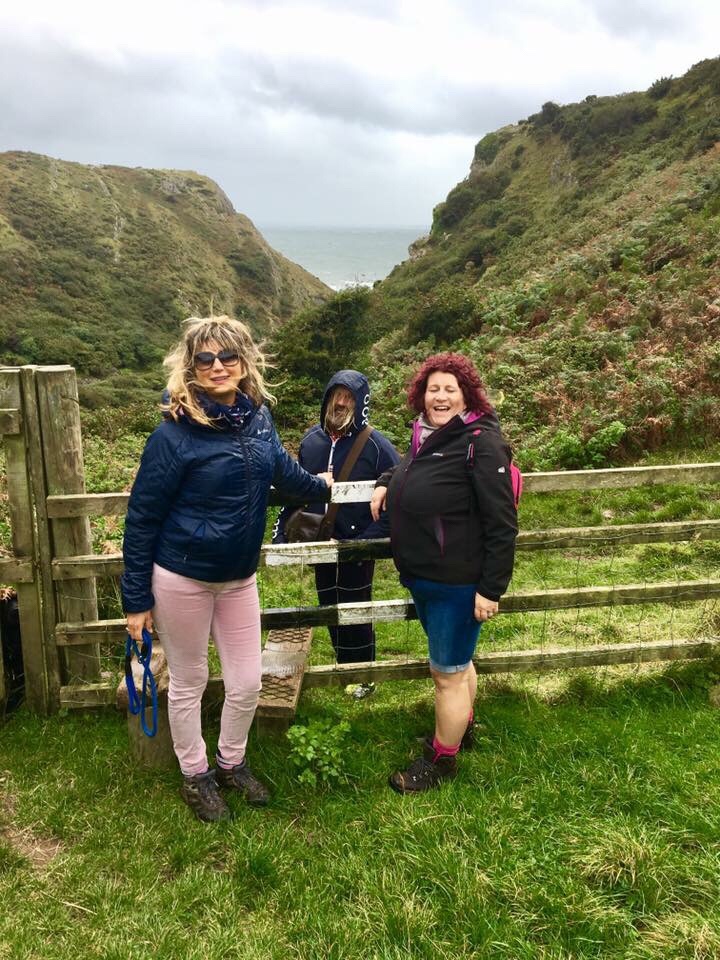 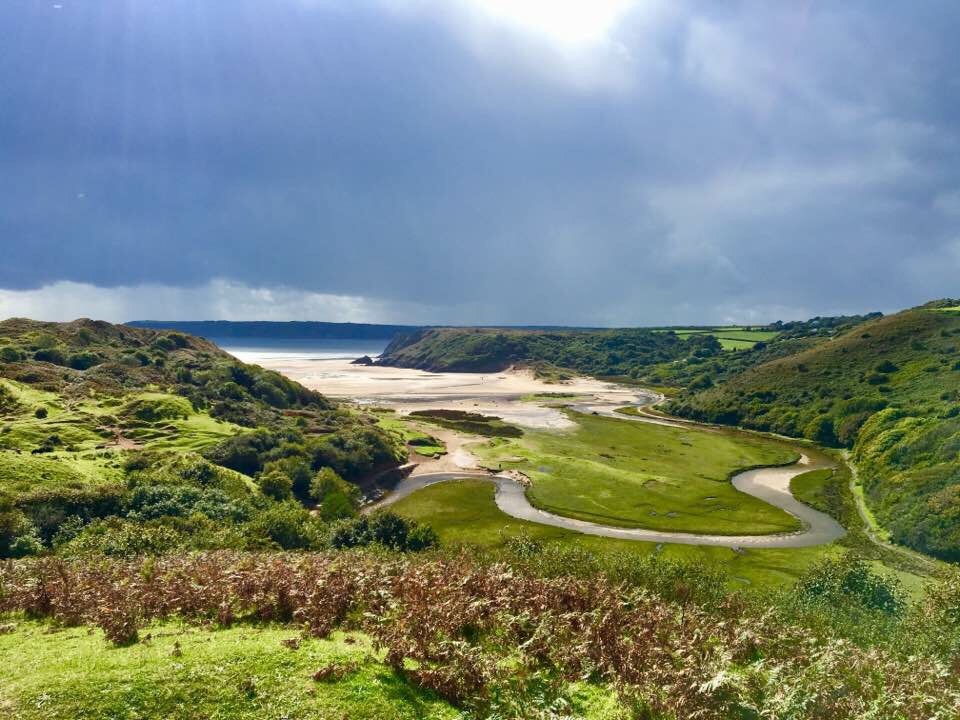 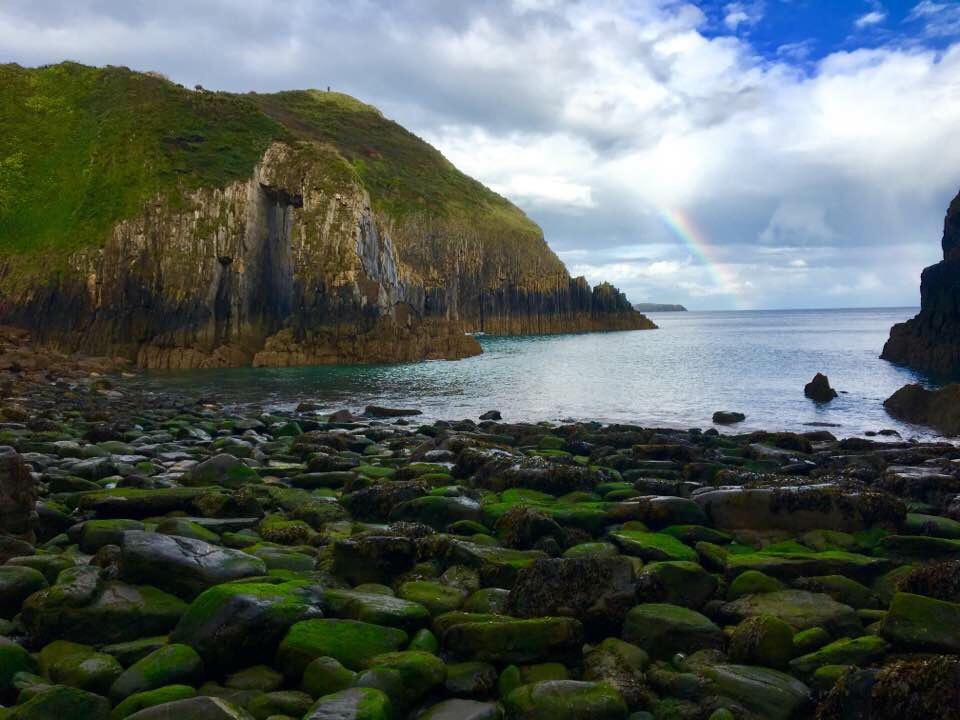 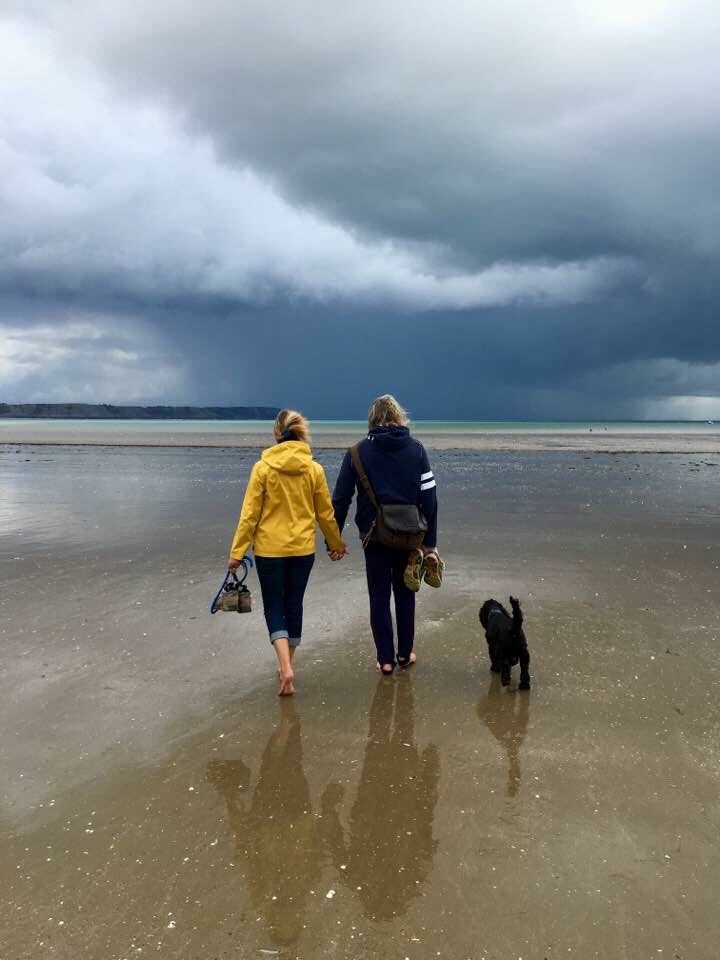 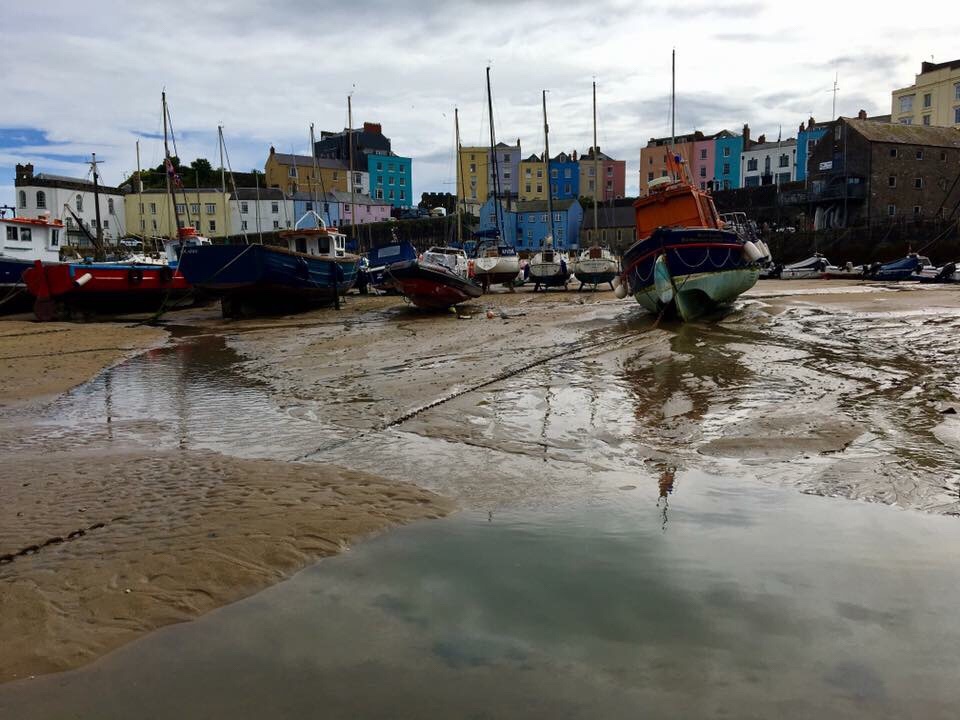 This trip, we had a couple of nights on the Isle of Anglesey and then met up with Janine and Graeme on the Llyn Peninsular at Abersoch, our dear old favourite.

First stop was Beaumaris. We are creatures of habit and always park up and have a night out at the Bull, they have an impressive gin bar, followed by a curry at Meghna Indian Restaurant. The food there is very good. We stocked up on goodies from the little deli and butchers then ambled along to the very special Penmon Point. The plan was to fish for mackerel but it turned chilly so we settled for a glass or two of wine, a seafood supper and the fantastic scenery. Who needs TV!!

The views driving on and off this Island are something else. We prefer to use the bigger Britannia Bridge so that we can look over at the more beautiful Menai Bridge. The second day was starting to get quite windy. Storm Helena was hot on our heels so we decided to sack our planned day at Lligwy Beach and walk into Moelfre and march on to Abersoch before the bridges closed as they often do during high winds. Can’t wait to see our friends. They were staying at Nantybig, Porth Ceriad, our old stomping ground from back in our T5 days. We have very happy memories of that place. Fires on the beach, Dolphin spotting and just great times. Unfortunately it’s not so easy for us to access these days in our big bus so we now stay at Deucoch nearer to town. You wouldn’t find a more pristine campsite. It’s lovely and the owners are absolutely smashing. The sea views take a bit of beating. Abersoch itself has a cool surfy vibe. There are several lively spots to eat and drink and some very nice shops. I like to pay it an annual visit with my girlfriends. We always stay at The Porth Tocyn Country Hotel which I can highly recommend. It overlooks the Bay. The gardens and outdoor pool are just gorgeous. Nick the owner is a very funny guy, extremely hospitable and the food is exceptionally good. It’s also doggie friendly.

We got settled onto our pitch and I sorted out some laundry. I do love a site with washing and drying facilities!! I’d brought a piece of Derbyshire lamb with me. Thanks Ed and Tom ‘the Ginger Butchers’ at New Close Farm Shop in Bakewell. If you are ever in the area, do go and see them. Their meat is home produced, how can it not be good when the animals graze on Lathkill Dale?! They also do fabulous pies!! Anyway, I digress!! Into the slow cooker with the lamb and I set out making a lamb tagine for supper. We are entertaining our buddies tonight. I still have apples from the tree at home so I’m going to bake an apple, date and walnut crumble with maple syrup for pud. By lunchtime the van smells like heaven. Supper is under control so we hop on our bikes and pedal up to Nanty. I’ve never seen the bramble bushes so heavy with fruit. The berries are huge and juicy. The hedges are also full of sloe berries as always at this time of year. If we were sticking around UK I would be out armed with my Tupperware containers, sloe gin on my mind but not this trip. There is still a lot of colour around in the hedgerows although it definitely feels autumnal now. We catch a glimpse of Hells Mouth (Porth Neigwl) on the right as we cycle up, the sea glinting in the late afternoon sun. Such a special place this. Our mates are chuffed to see us. It’s been a year. Nothing changes. Jan was my chief Bridesmaid. G and I used to be Office Juniors together back in the day at Sheffield Law Society. I’ve known them both since I was 17. They are a lot of fun and I love them dearly.

They come to us for 7pm. We eat, drink and make merry until the early hours. Great night in good company. The wind hits very high speeds over night. Our van is rocking but I fear for the Barrass’s air awning. We walked up to them next morning, luckily they had survived, unscathed. We walked around the headland with a view of St. Tudwals islands, now home to Bear Grylls. The dolphins put on a fabulous show for us much to Janine’s delight. 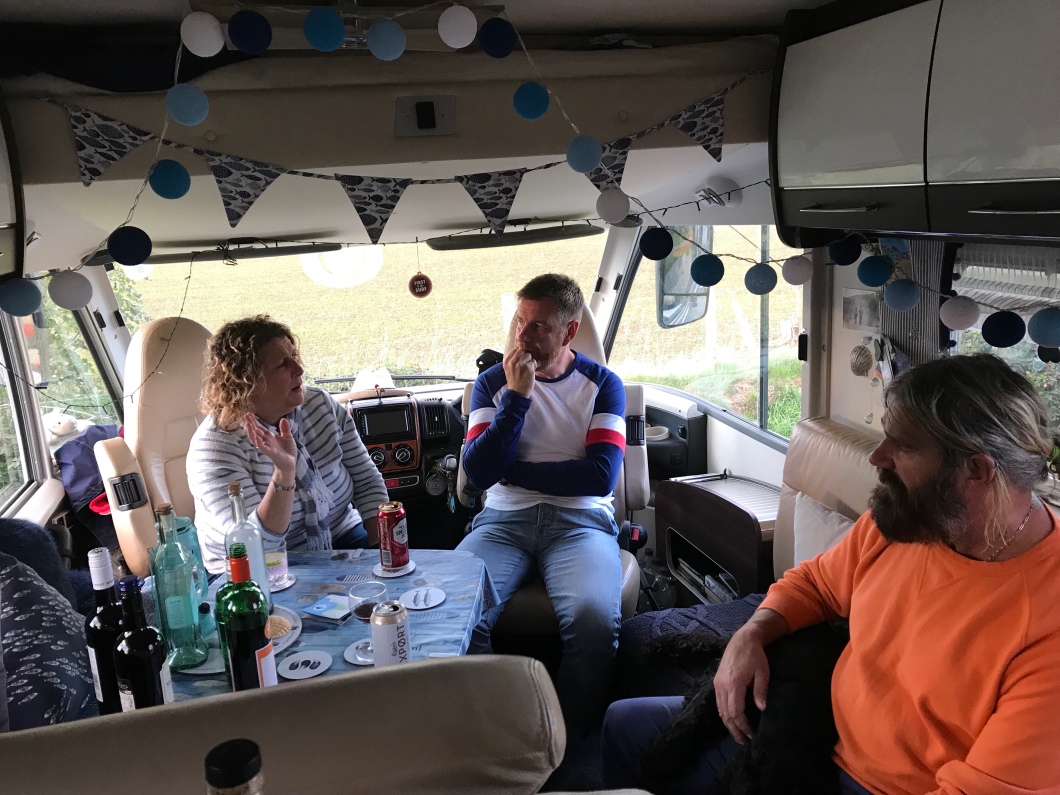 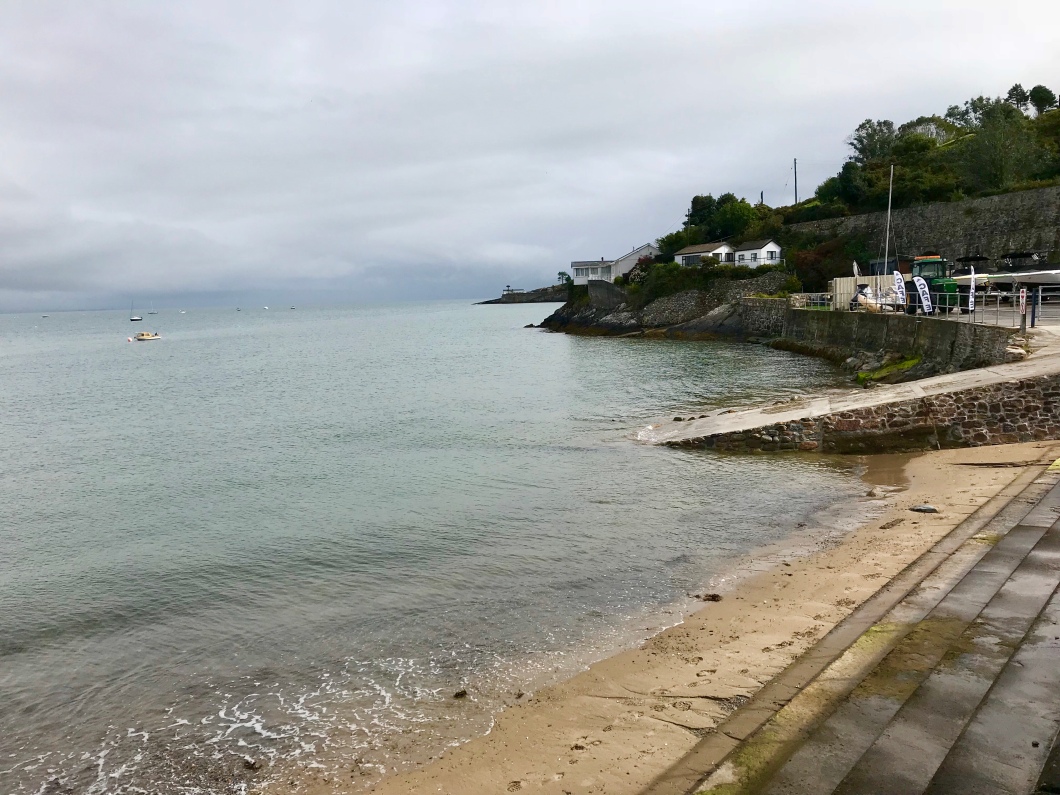 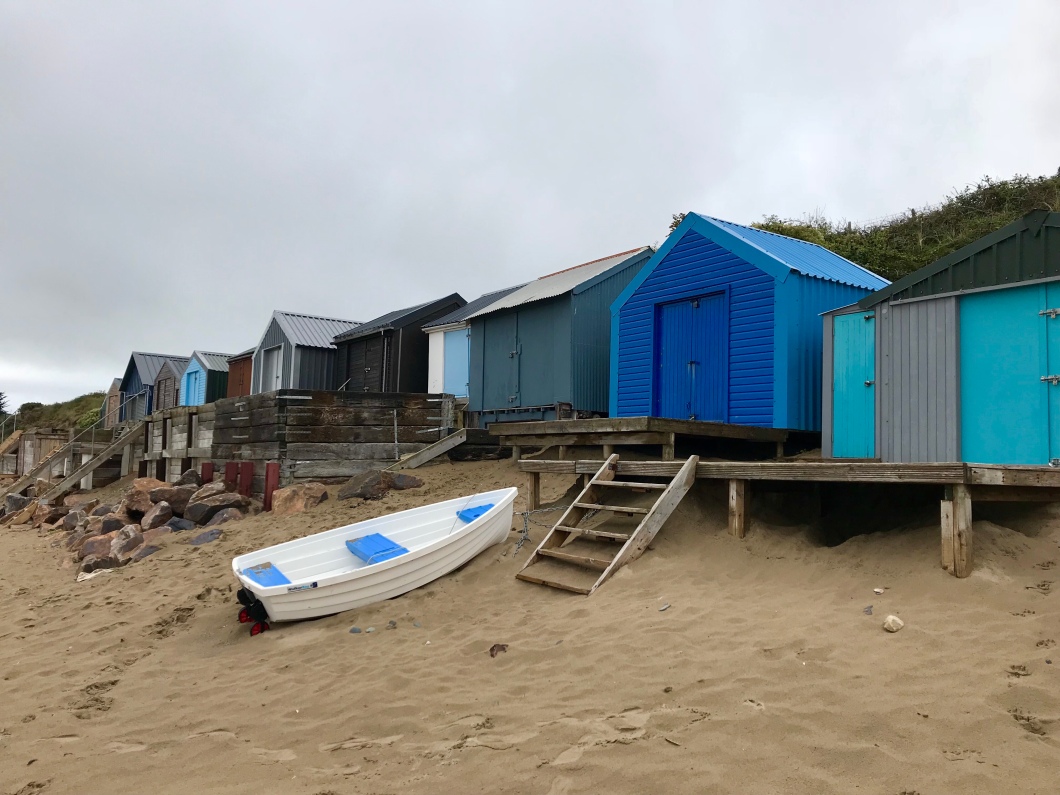 We had a wander around the shops and then stopped for really good coffee at Kin and Co with a couple of Brie toasties. Abersoch Boatyard opposite sells a marvellous array of boaty beachy ware. We always have to have an annual team sweatshirt or hoody when I come here with the girls.

It’s a bit of a hike back to Nanty so we need more coffee and cake at Blades Cafe to fuel us for our walk. It’s another old favourite. The lady who owns it is so friendly and the cakes are super yummy. The Abersoch Gallery is on our way back. It sells some fab bits and is well worth a look.

Next day we walked again. Along the beach this time. The coloured beach huts look great. We couldn’t resist a cheeky glass of wine in Zinc’s new conservatory overlooking the boats. That led to lunch. We needed to walk back to burn off the calories!! 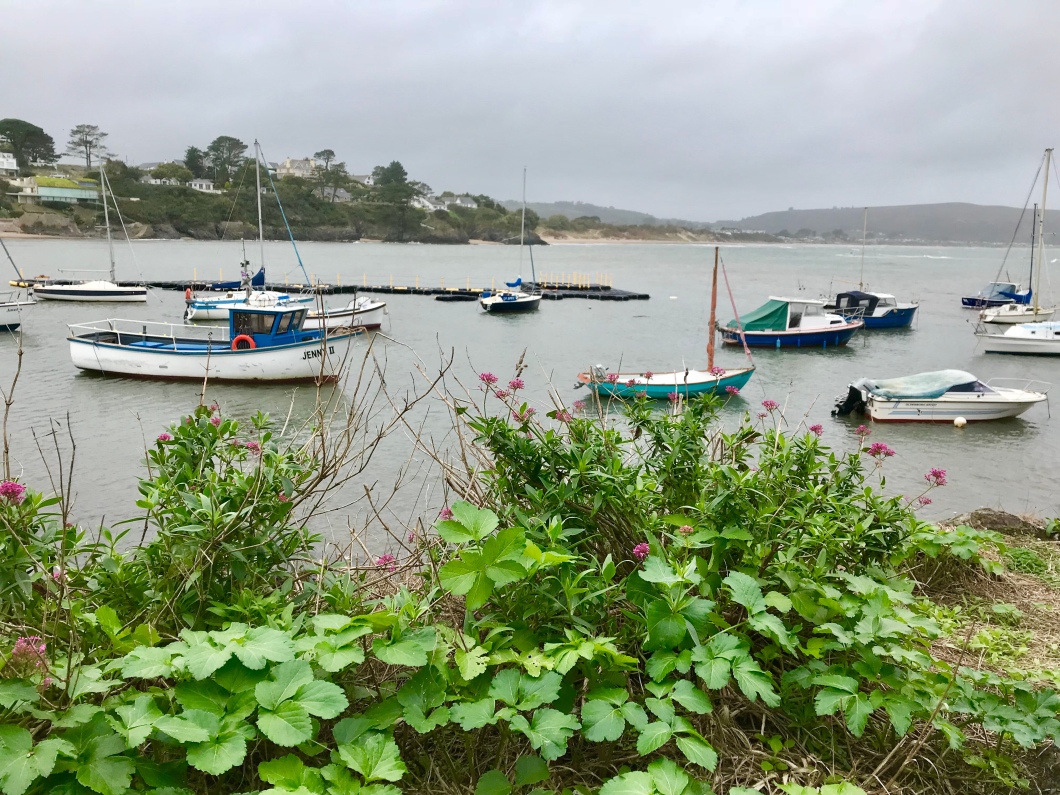 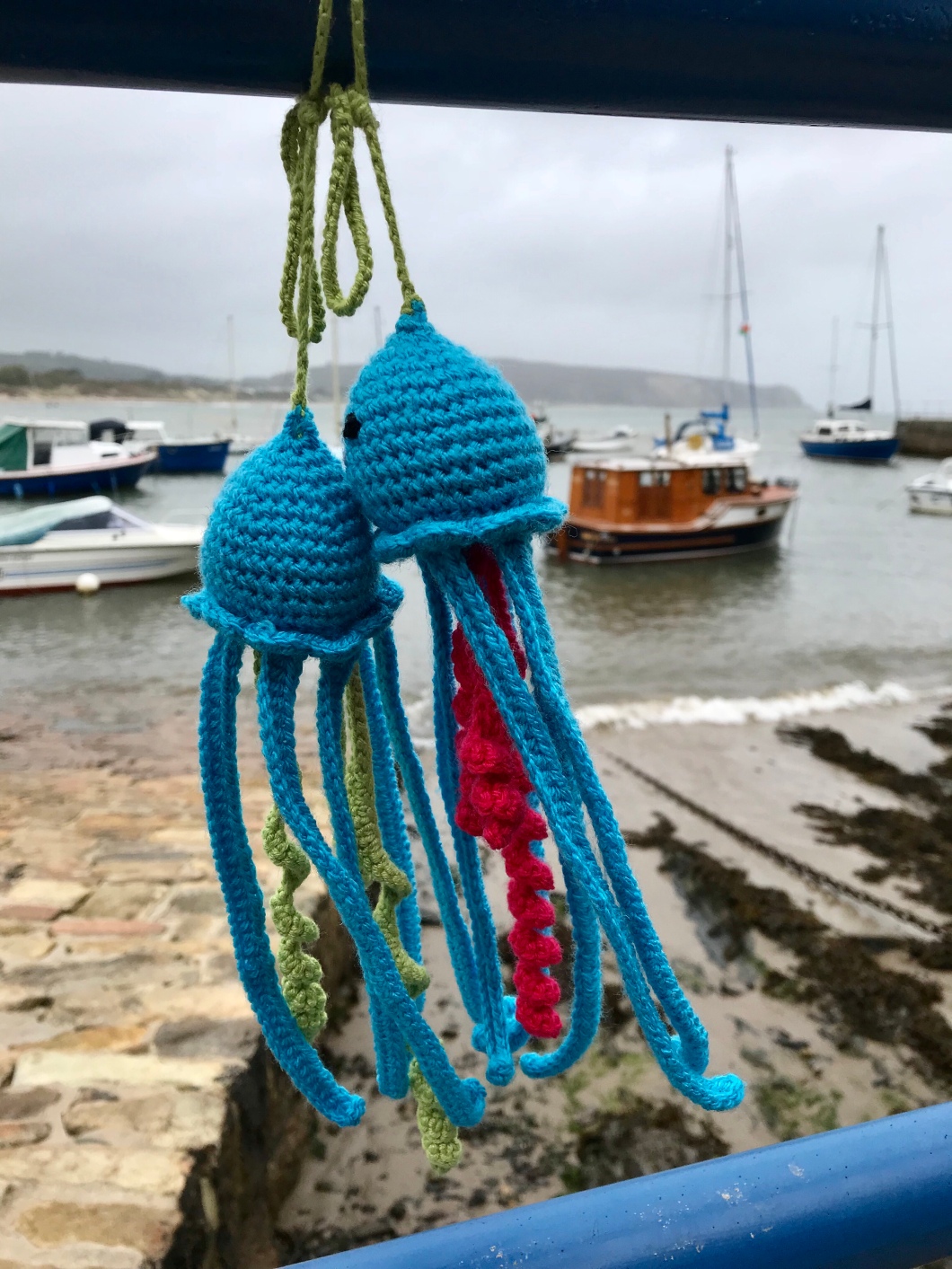 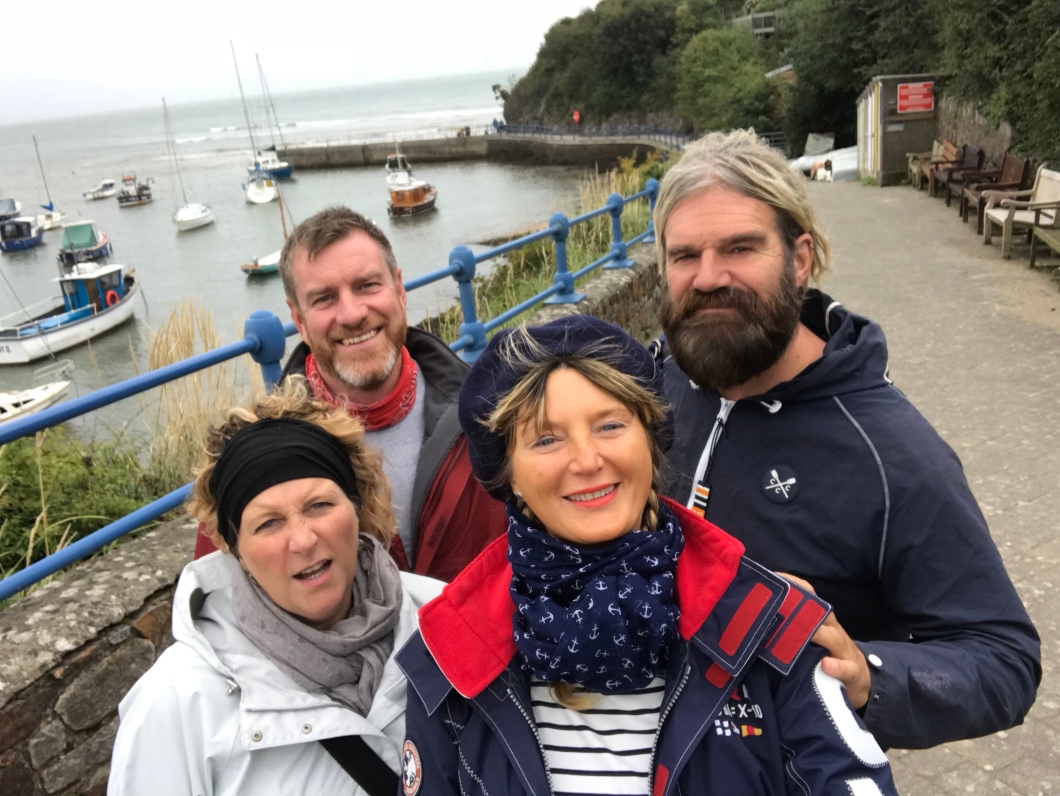 The storm threatened to pick up later. So we all went back to our own vans and holed in. It raged overnight. Next day was wild! We all went down to Porth Ceriad. The waves were savage, so much foam created by the force!

Grim weather calls for curry! Out came the slow cooker again. It needed to be hot and spicy to cheer the mood. Gin also helped!! Another fun night was had by all. What a hoot! Nothing beats a good laugh! 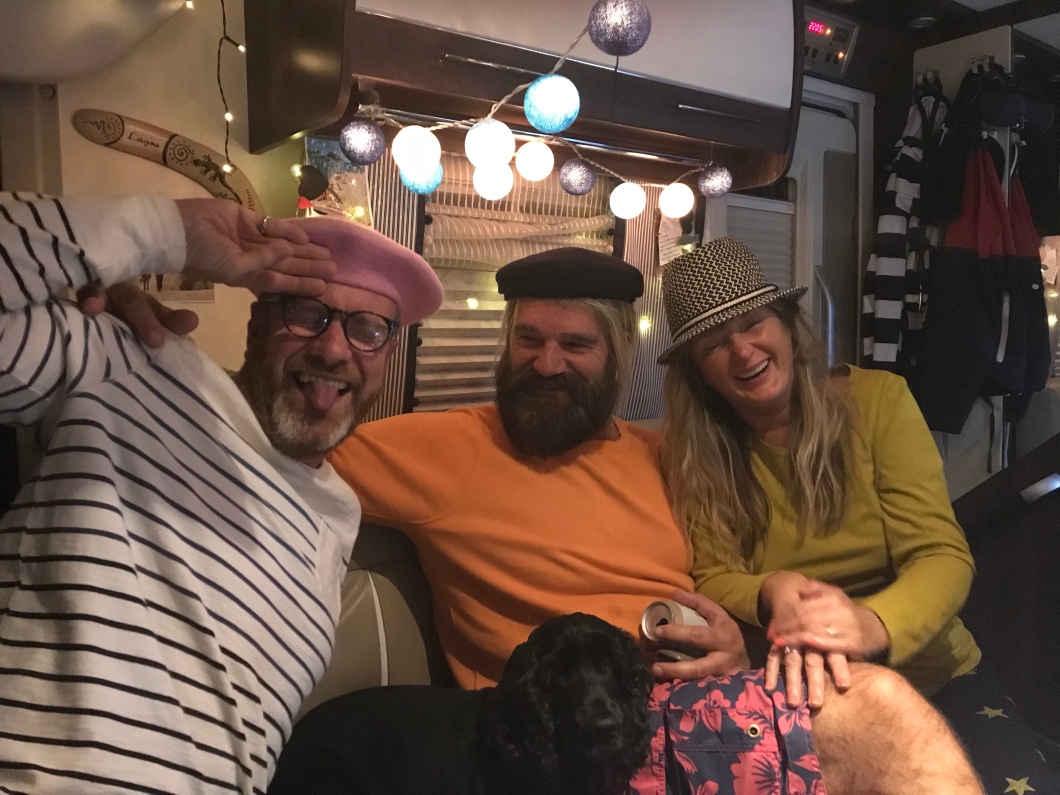 Well we didn’t let the weather spoil our fun! It was a pretty horrid journey home though and parts of Derbyshire were flooded when we got back. We were very sorry not to catch up with our friends the Spencers who have moved to live on the Llyn. Lucky devils! The rain had set in and the winds were hideous. Next time guys!

It was another great trip! Fantastic to have a bit of fun with those two crackpots. Time to get the maps out now. That tunnel is booked and calling!!

Let’s get cracking!! Watch this space folks. Hope to up the pace from next week. Hope you are all well in the meantime. Love to all, life is for living. Be happy ❤️