We really REALLY didn’t want to leave Playa La Higuerica, our amazing wild camp by the sea. I had the best birthday. All thoughts of expensive restaurants, nights in spa hotels and the likes went out of the window when we arrived there. Such a beautiful spot. Each morning the familiar little white van tours around the coast, tooting its horn, selling fresh bread, just the same as in Portugal. This time it was a German lady who baked the most wonderful cakes. It was as if she had known it was my birthday! Cake and champagne for breakfast, does it get any better?! 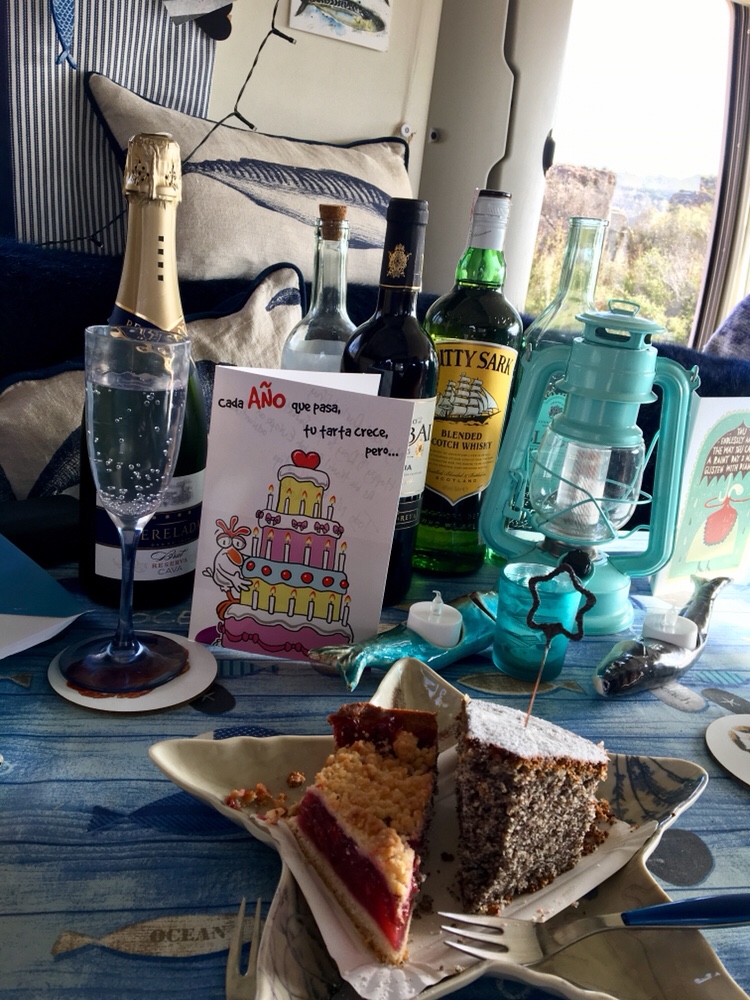 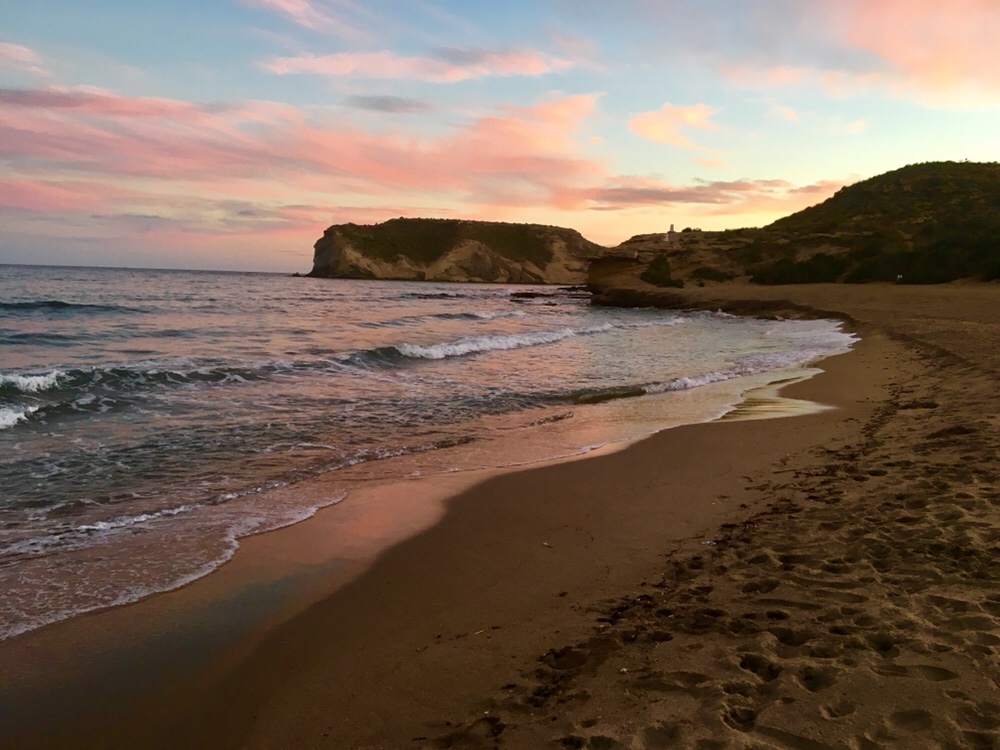 We spent the whole day on the beach, the sun shone just for me, hurrah. (Just a word of warning though, if you’re thinking of heading to these parts, you need to be fairly broad minded as it is frequented by naturists. It came as a bit of a shock when I realised the chap behind me in the bread van queue was in a birthday suit all of his own! I almost choked on my croissant! Anyway, it was far more interesting viewing than Coronation Street of an evening. Don’t say I didn’t warn you!!). We cooked up a wonderful Paella for supper washed down with more Champers, pink this time, gifted by our lovely new Spanish friend. How kind! I will overlook the fact that he delivered it stitchless, apart from a towel which, draped around his neck, didn’t quite cover the bits I didn’t want to see,(shut it Erica Wyatt, I can hear you chortling). I have no clue how Mark and I kept a straight face but how we laughed until we cried later behind closed doors.

We spent 4 glorious days between Playa La Higuerica and Playa Carolina and only left because we were almost out of water. We took a trip down the road to ‘Anibal’ a Motorhome Service Station in Aguilas where you can empty waste, fill up with water, fuel and gas and clean your vehicle properly from an overhead gantry. Oh yeah, laugh a minute my husband. Sends me up a ladder with a high pressure hose and expects me not to soak him! As if! Even if I’d wanted to behave, the bloody thing was so powerful I could hardly keep myself upright. There he was barking out orders as the machine was on a time limit, how could I resist? We both ended up wetter than the van. We entertained everybody else on the forecourt for half an hour with our silly antics and then we were off on the road once again.

First stop was Mazarron. It was all red ochre rocks, towers and wild turquoise waves dotted with surfers. We only pulled in for a brief look as the wild camping spot we had hoped for was full. A shame as it looked great. We’ll put it on the ever growing list of places to come back to.

Next spot on the map was Azohia, just around the coast from Cartagena. By the time we arrived the wind had got up and the sea was wild! It was still really hot but the sky looked stormy. We parked up and went for a stroll. It’s quite a dramatic combination of sea and mountains with a fort perched on the hillside. 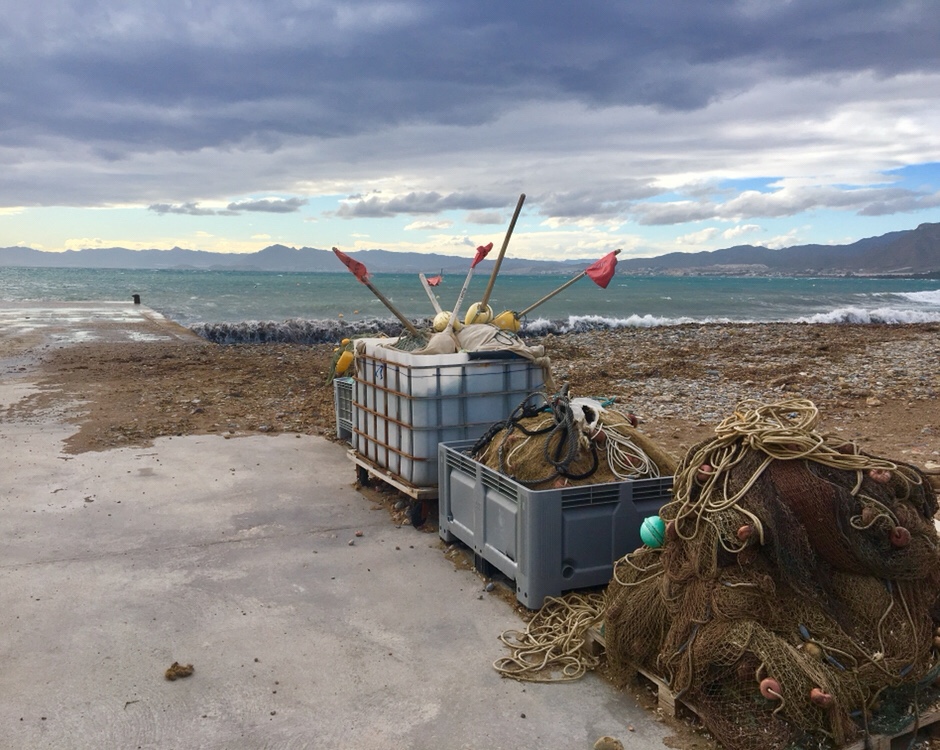 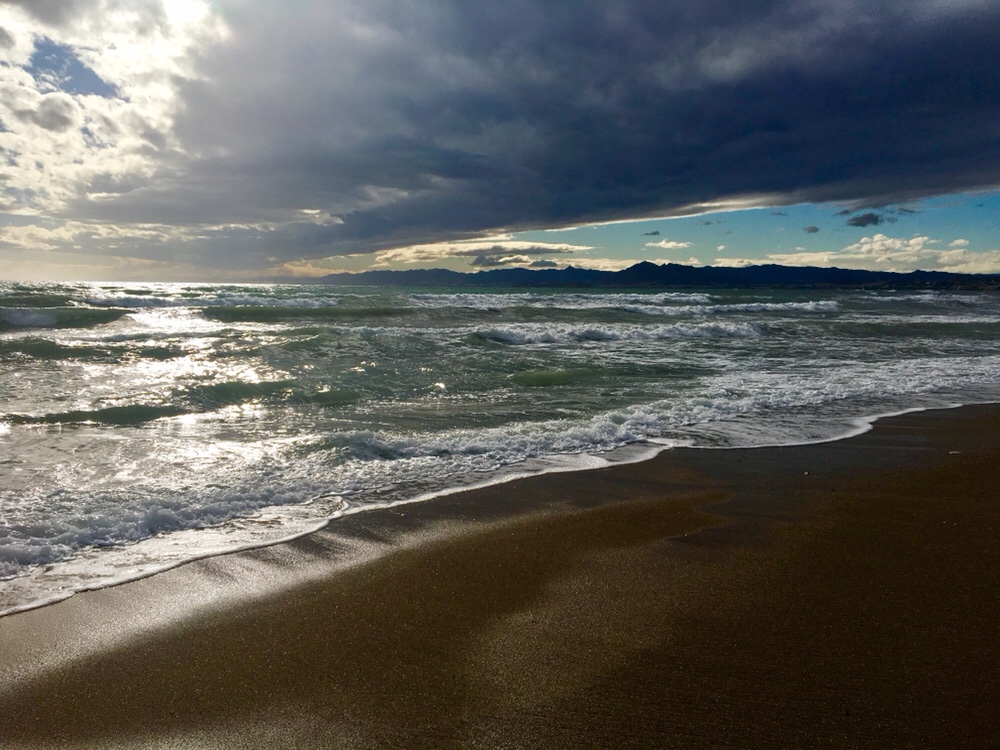 The sky was getting angrier by the minute so we made haste back to the van, opened the Rioja and cooked up some spicy meatballs and rice. There was a very brief shower followed by an amazing red sunset. Awoke this morning to beautiful blue skies, not a cloud in sight. We moved on quite early today as we were unsure how far we wanted to travel. As it turned very hot we only did about 40 miles. The road into Cartagena took us up through the mountains. My palms were sweating a bit on some of the hairpins, eek!! It’s a good job Mark is as cool as a cucumber while I’m a shrieking wreck! The scenery was once again spectacular, lots of windmills, wells and pretty little villages. On the other side of the mountain range it’s quite a different story. The approach to Cartagena is littered with old mine workings and once past there it’s a built up, commercial jungle leading into the bay of Cartagena and the man made resort of La Manga. We are trying to bypass all that and are aiming for Cabo de Palos. We arrive at the lighthouse there and thankfully there is one space big enough for us. It’s a fabulous view!

There are several pretty little coves on the coastal footpath and a great fishing harbour lined with impressive looking restaurants. It’s a really nice looking place. The local dish here is Caldero. It’s made with fish, rice, potatoes, saffron and paprika and cooked over fire in a cast iron cauldron. A bit like Paella. We pick the place with the finest view of the harbour and order their speciality with a Rosado Rioja to wash it down. Absolutely delicious. Highly recommended, can’t wait to have a go at making it myself! 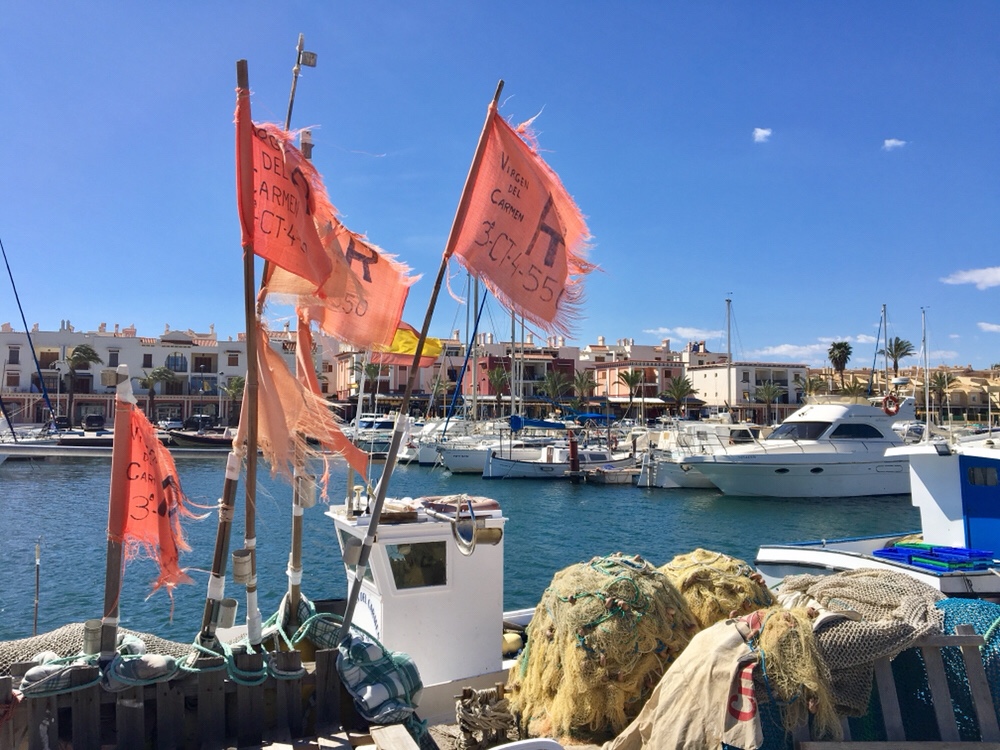 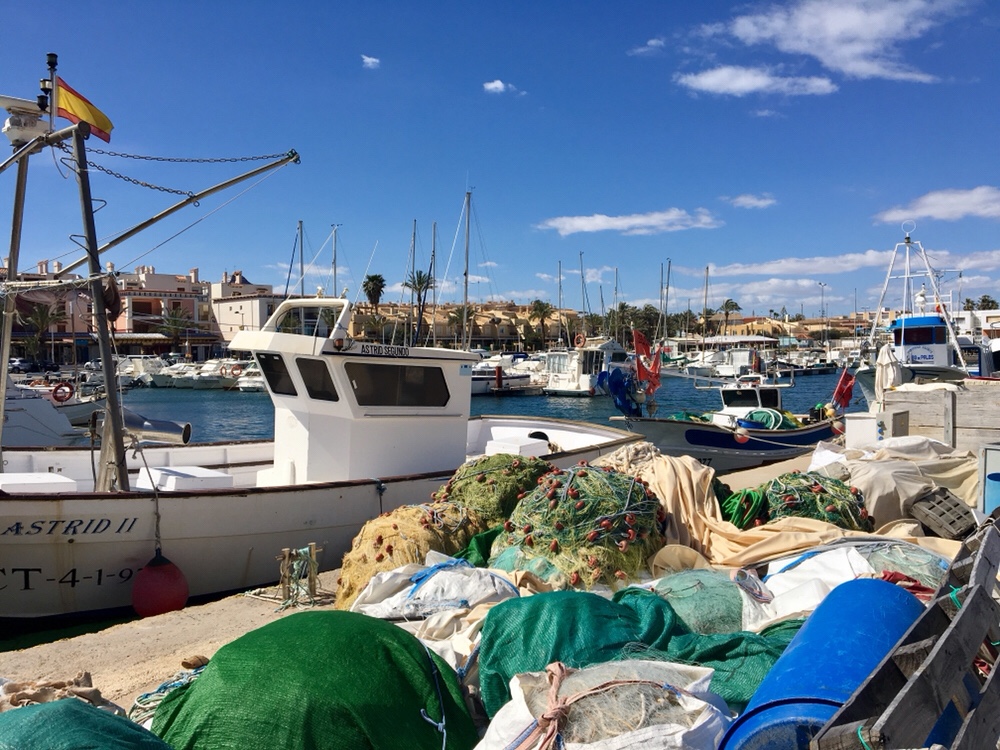 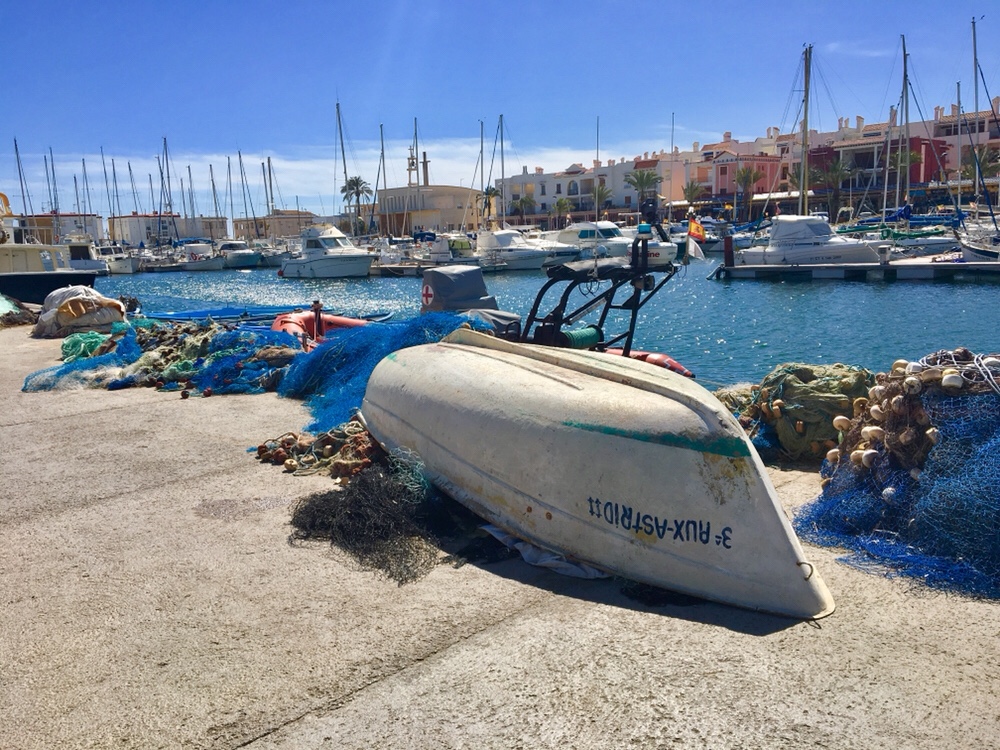 After a long lazy lunch we walk back along the coastal path to the lighthouse. It’s a wonderfully scenic walk. On the way back the Spanish equivalent of the Red Arrows gave us a super display!

It was still very warm so we took Dylan down to the little sandy beach nearest the van for his daily swim. The water was so crystal clear. You can see the start of the high rise buildings across the bay from here which is the resort of La Manga. I’ll pretend I can’t see them! 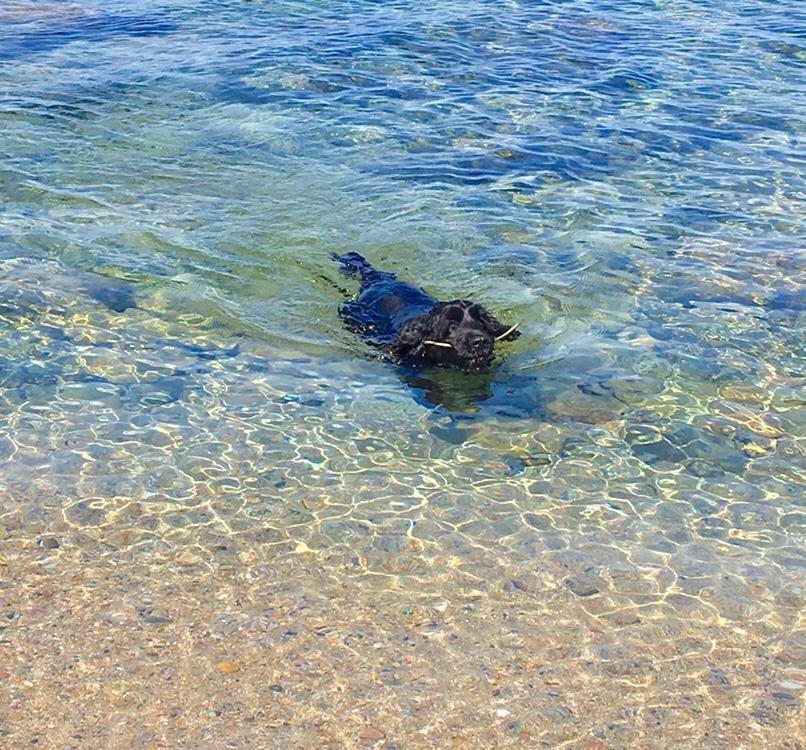 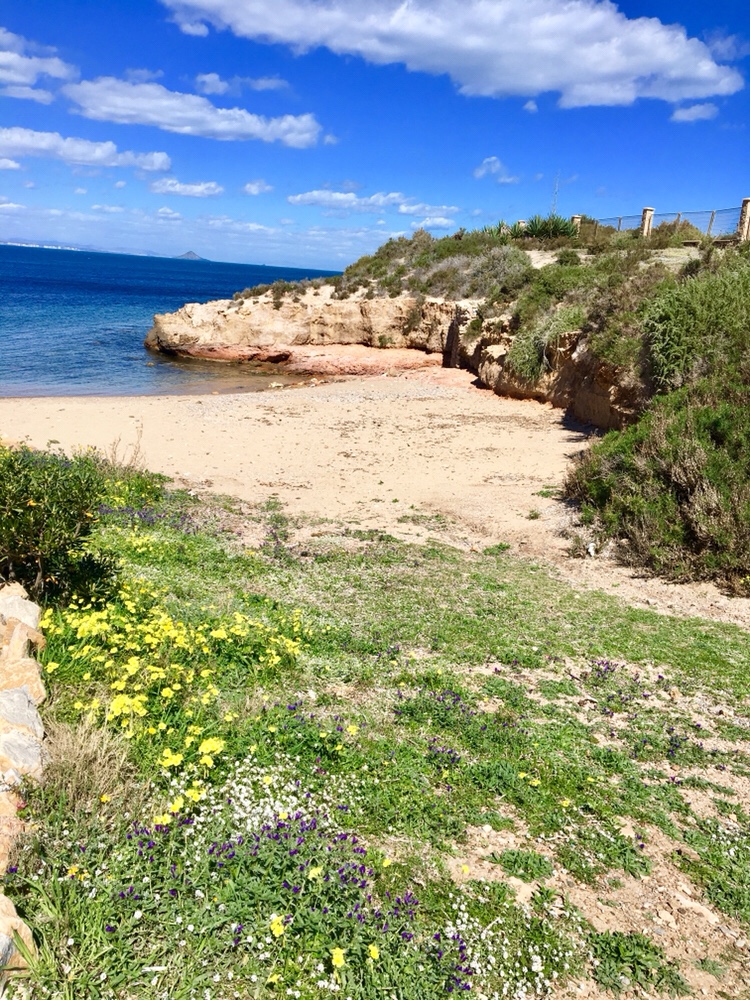 We once again watch the sun go down over the shimmering Mediterranean and retire to the van to do a bit of route planning for tomorrow. It’s a steady journey now up towards Valencia and a bit of culture.

I shall bid you a Buenos Noches my lovely friends. That’s another Monday out of the way. Mine has been quite wonderful! Hope yours has too.