Over the Hills and FARO away

So we find ourselves moving on from the natural beauty of Tomato Beach, which was quite a wrench, to Faro, a busy, bustling, Airport town. The back roads leading to the Motorway were bottom cheek clenchingly narrow but the boy drove calmly and admirably as usual, ignoring my dramatics. There are two Aires in Faro according to our dear friend, the CamperContact App. One sits literally at the end of the Airport runway and the other is on the beach. Faro Praia is an island, a spit of sand basically divided from the mainland by the Ria Formosa and its nature reserve. There is a narrow bridge linking the two. It has a 3.5 ton weight limit dammit but we decide to wing it. If we drive fast we are lighter, obviously!! We do it in double quick time avoiding the GNR as apparently it’s a big fine if we are caught at 5 tons!! The bridge does not collapse into the estuary so all is well (if you drive fast you are lighter. Right?!) We get parked and immediately bump into Gordon and Sue. A lovely couple whom we had met previously on the north coast. They are same age as my parents and happily doing the same as us. Admirable really. This side of Faro has a real seasidie feel to it and the most beautiful beach. There are a few bars and a great Burger/cocktail joint with a surfer theme called Wax. Lined that up for sundowners as it’s literally on the sand. To the left, if you walk to the end of the tarmac road, it turns into a shanty town of fishermen’s shacks, the poverty here is blatantly apparent. To the right, the holiday beach huts are a different kettle altogether, they reek of money. 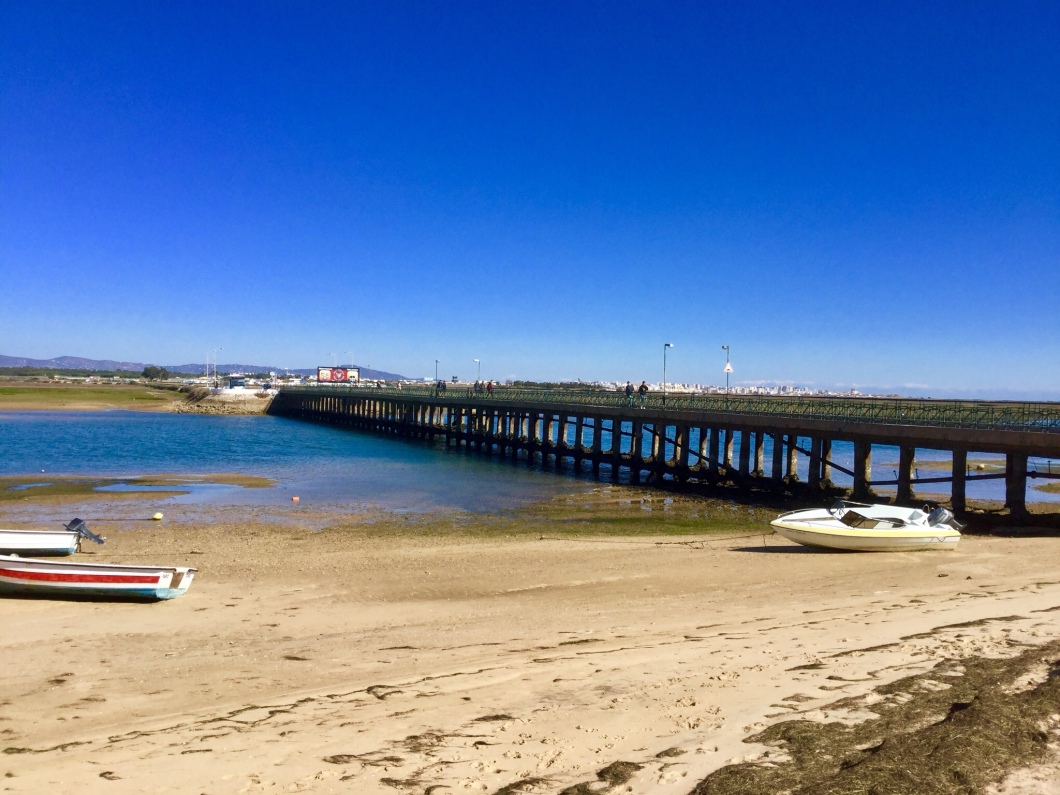 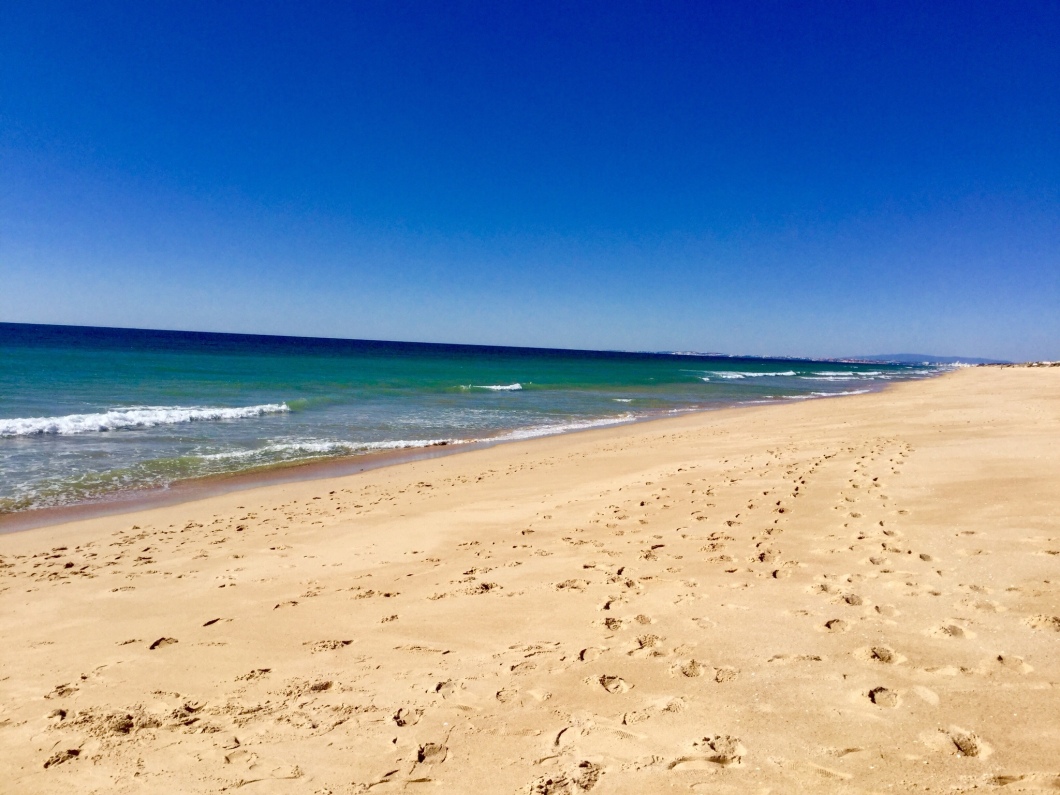 We spent the day walking on the beach. Mark got proper told off for washing the van with soap as the Ria Formosa is protected against any pollution. Oops!! We decided to drive back over the river that evening and park in the other Aire as himself wanted to do a bit of plane spotting. Whatever. I was quite keen to do the walk into the nature reserve and see the storks and flamingoes. 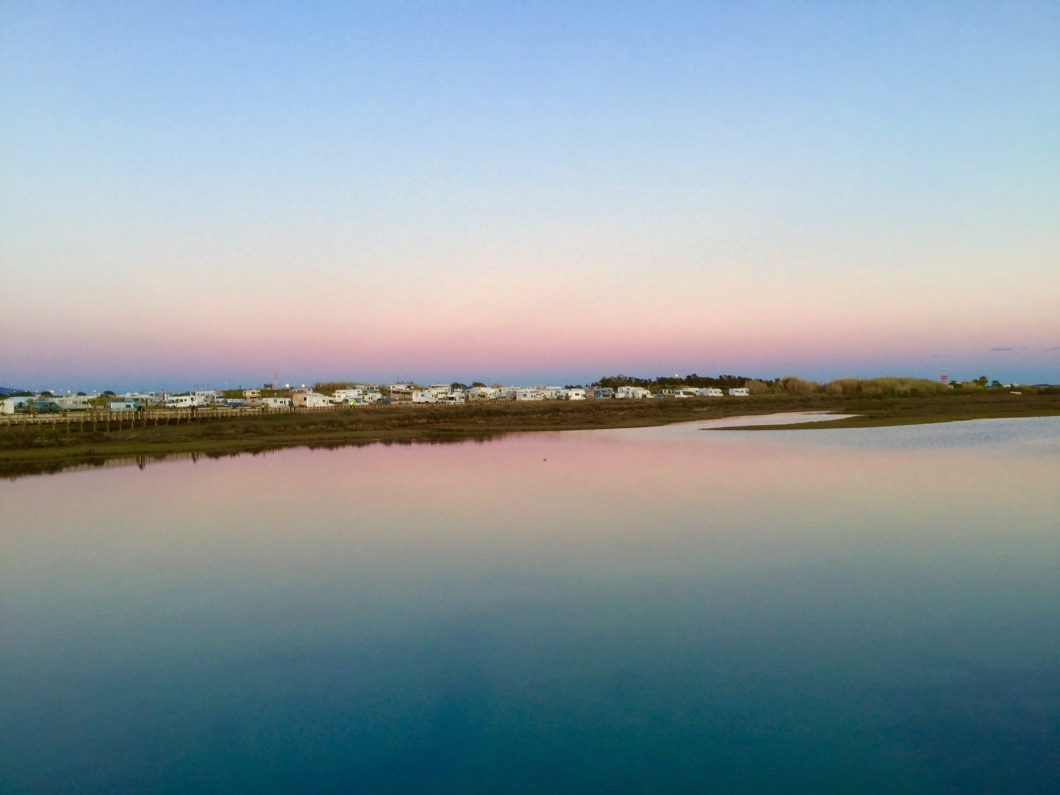 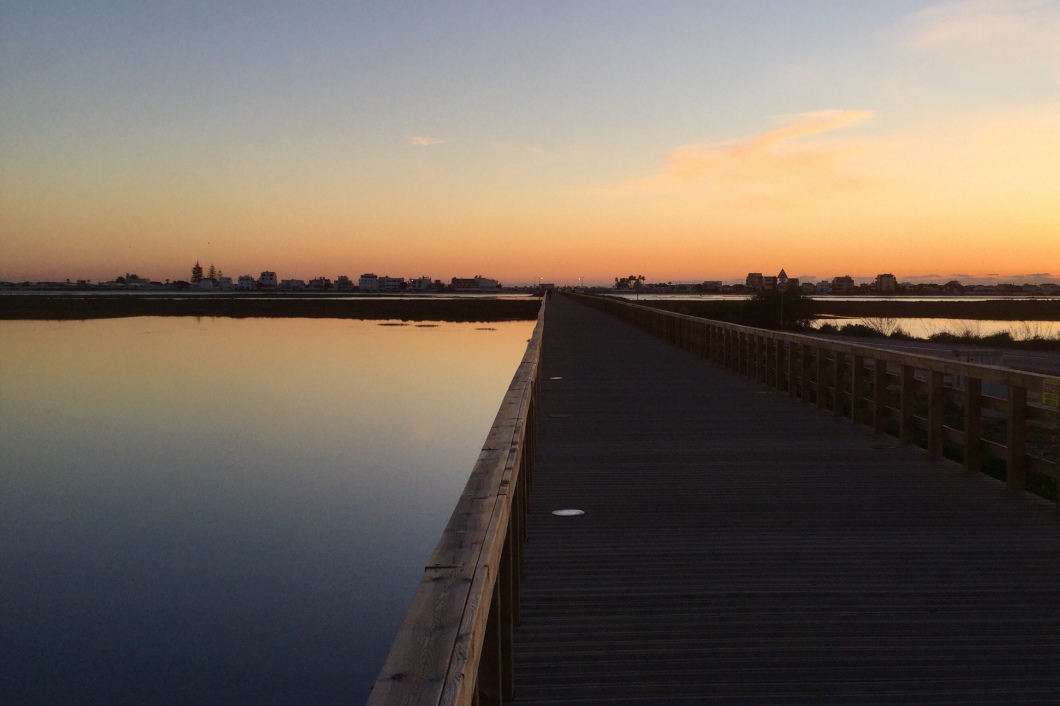 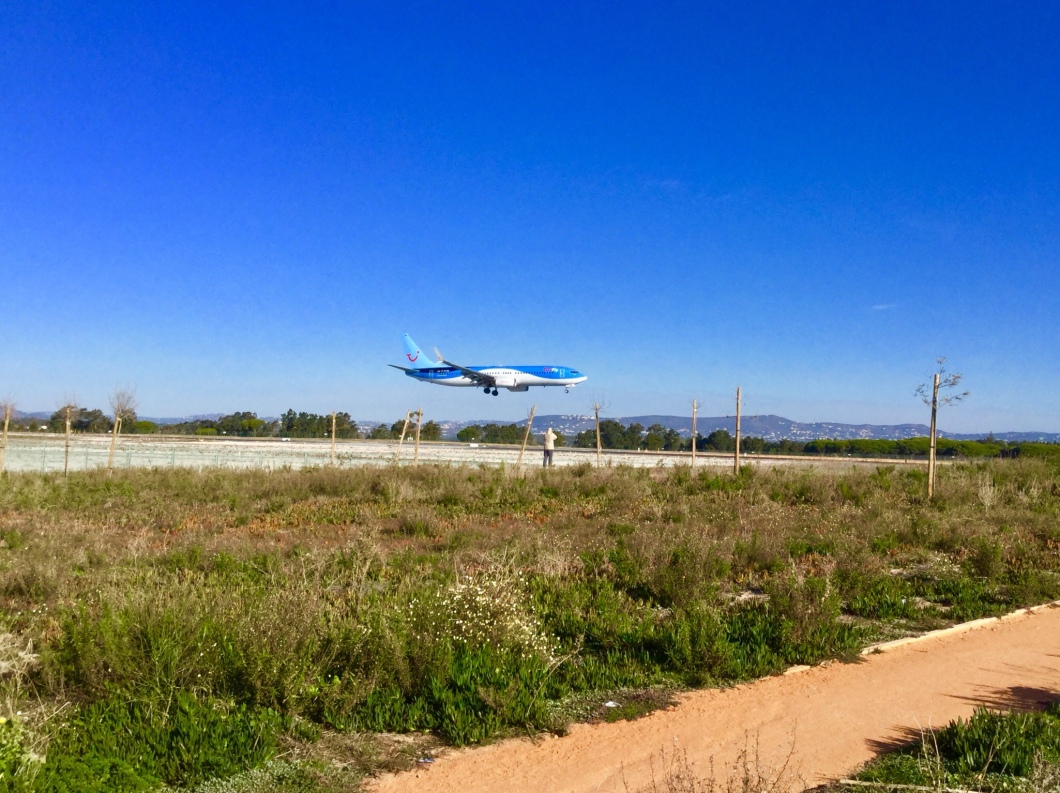 The planes were almost touching the van as they landed and took off. We were right on the edge of the wetlands, the birds were absolutely amazing. Fabulous sunsets too.

Today, we decided to hop on a bus and visit the old Town of Faro with Marion and Tony. It was impressive! We really enjoyed the beautiful Squares lined with orange trees, laden with ripe fruit, the old churches and museums. The chapel of bones constructed as it would suggest, entirely of human bones was very eerie. Managed to accidentally gate crash a funeral. I wasn’t wearing my specs as we entered the Cathedral. Busy snapping away, didn’t even notice I was photographing the corpse laid there amongst the flowers in his casket poor lad. How awful of me, hope he saw the funny side from heaven, Tony certainly did! Spot the storks nesting on every bell tower! 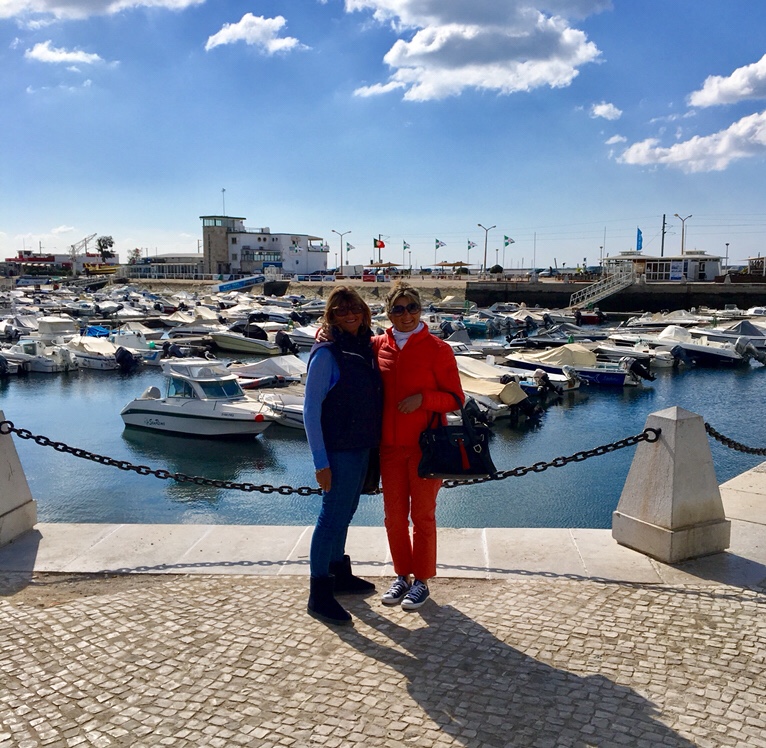 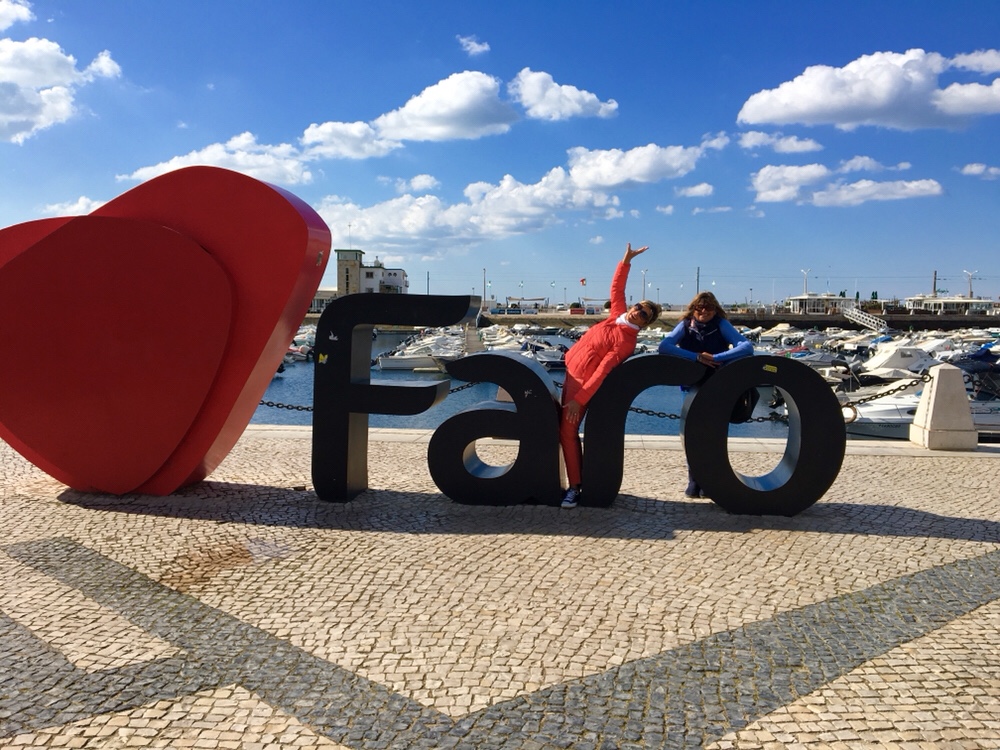 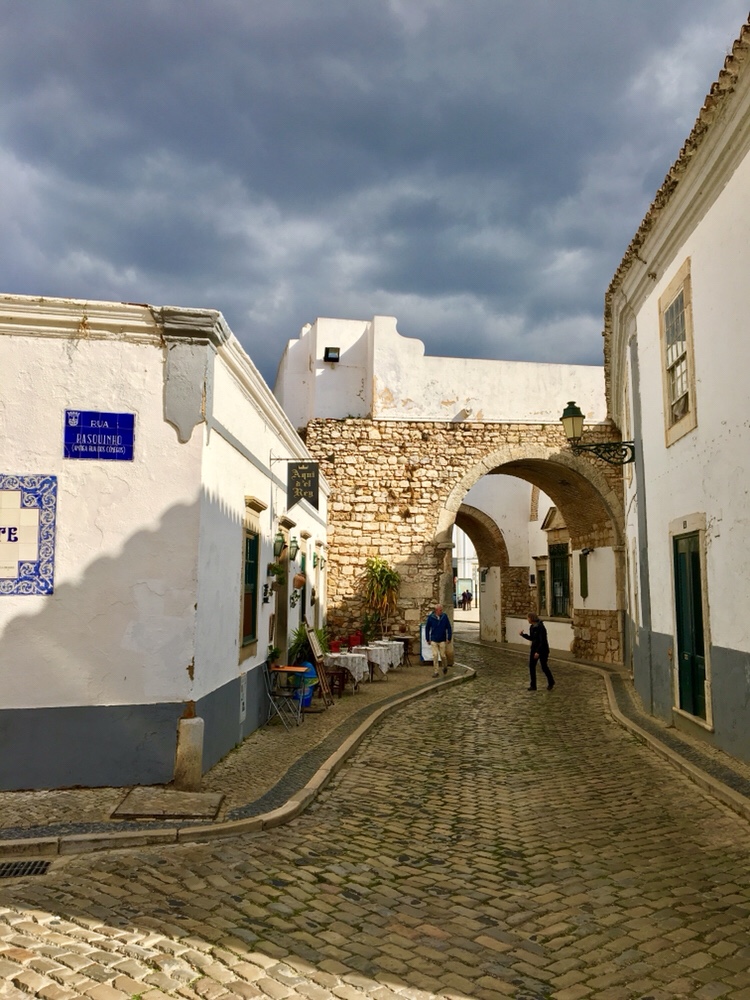 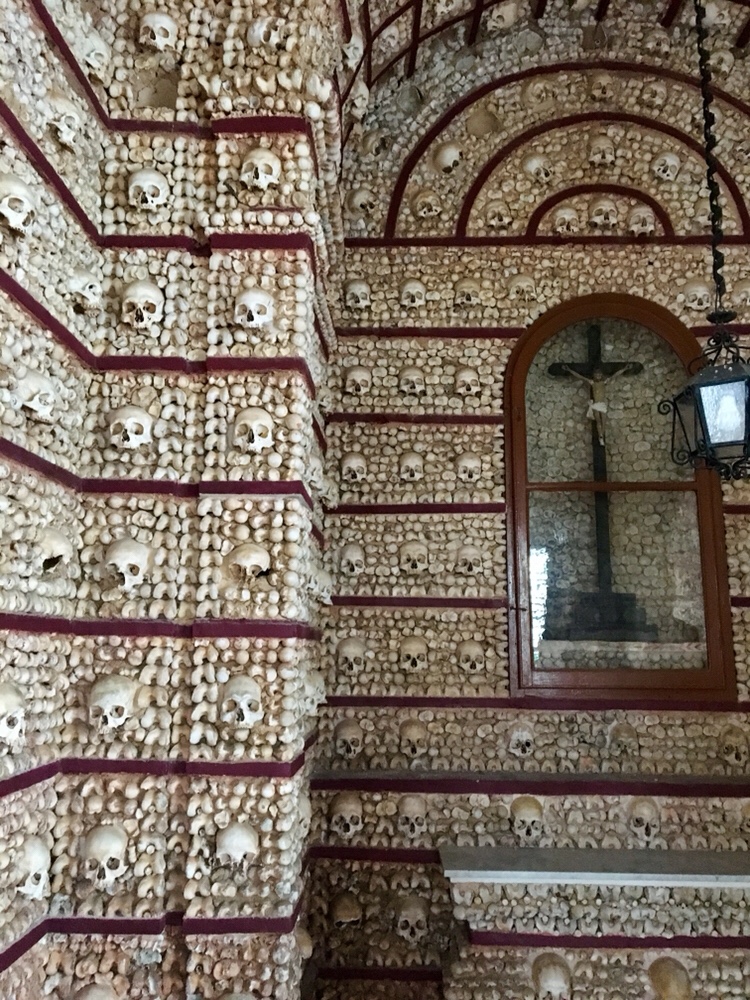 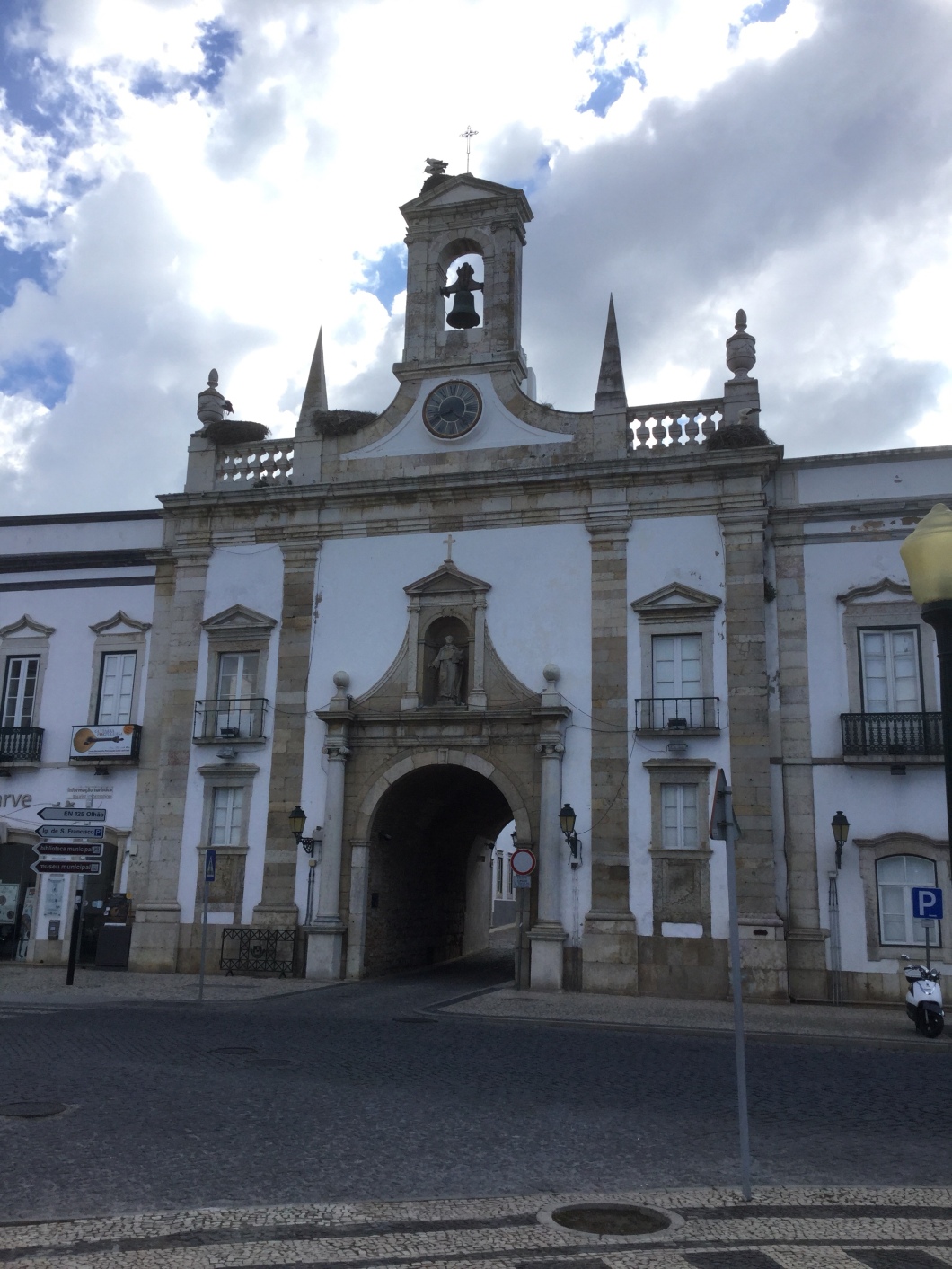 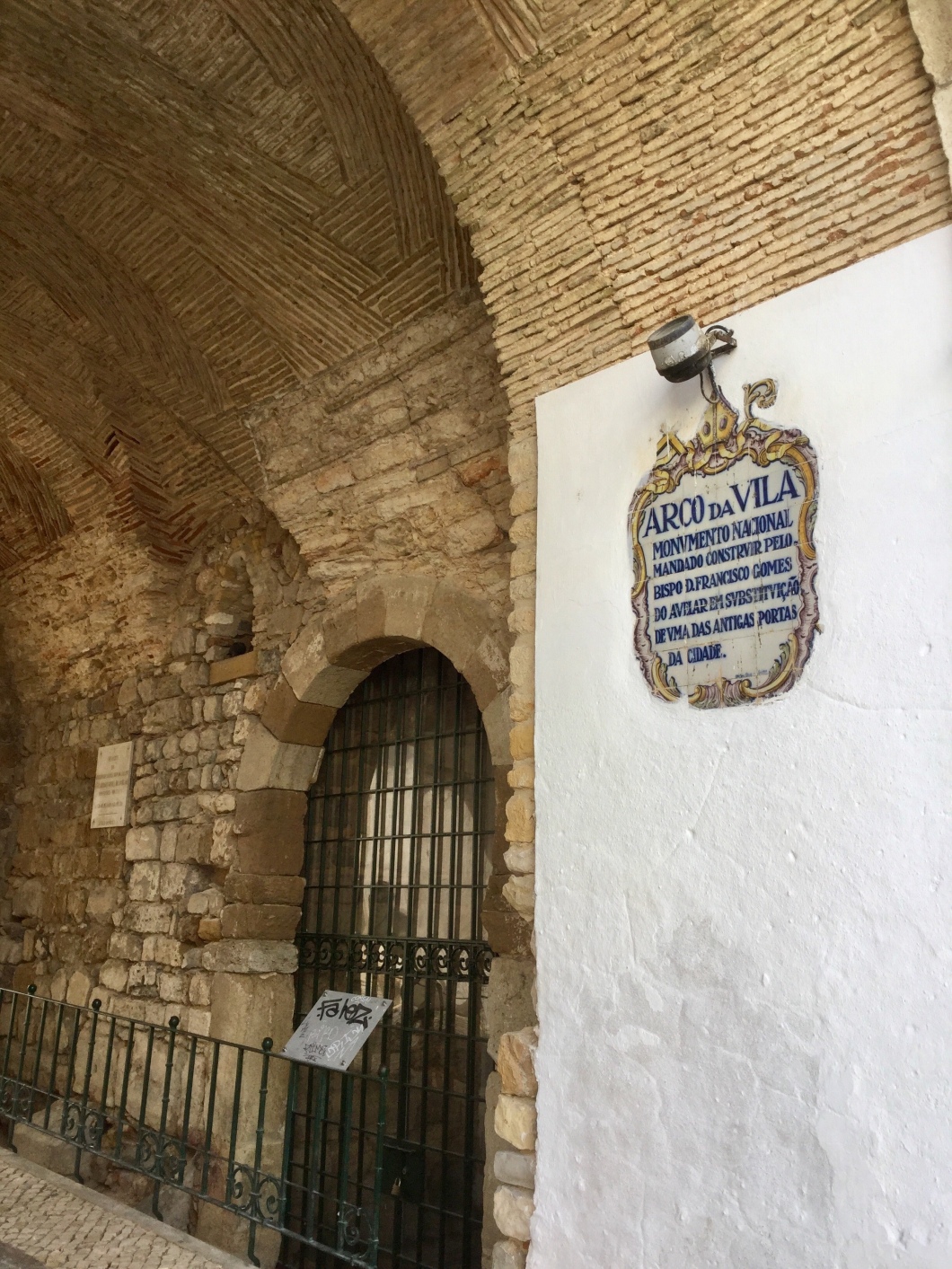 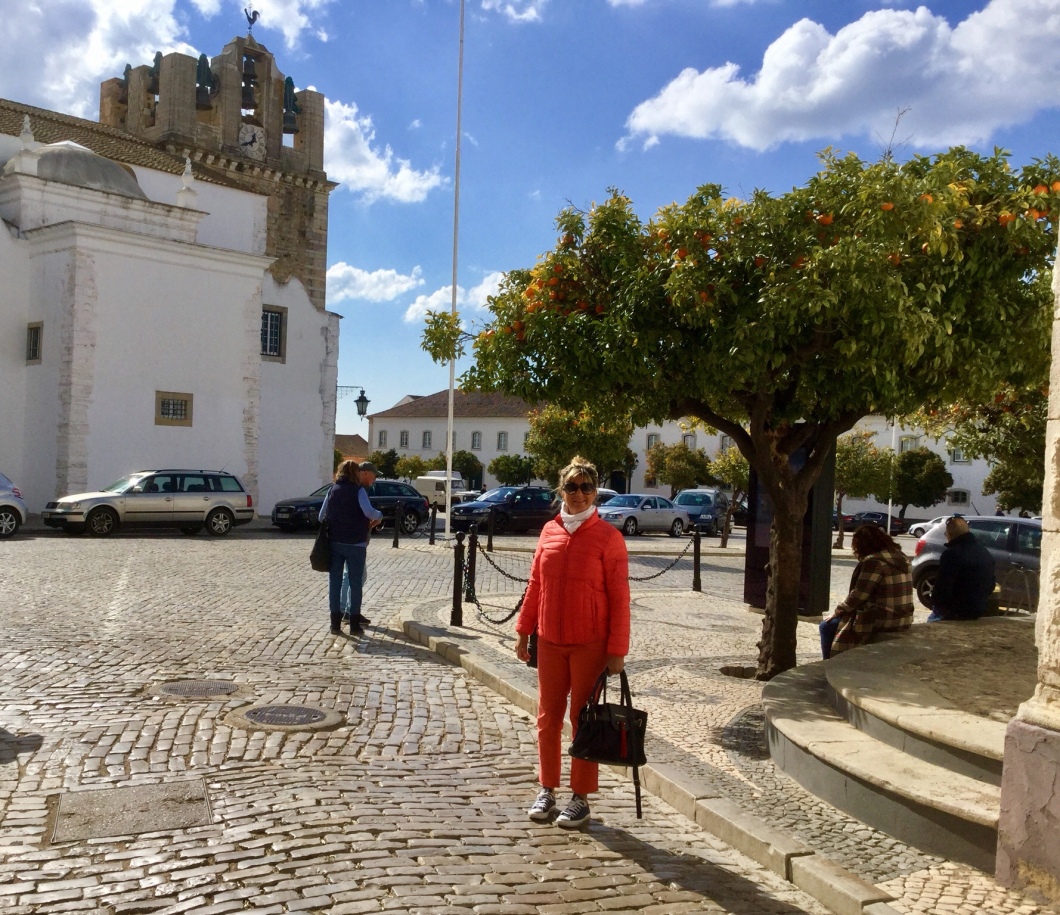 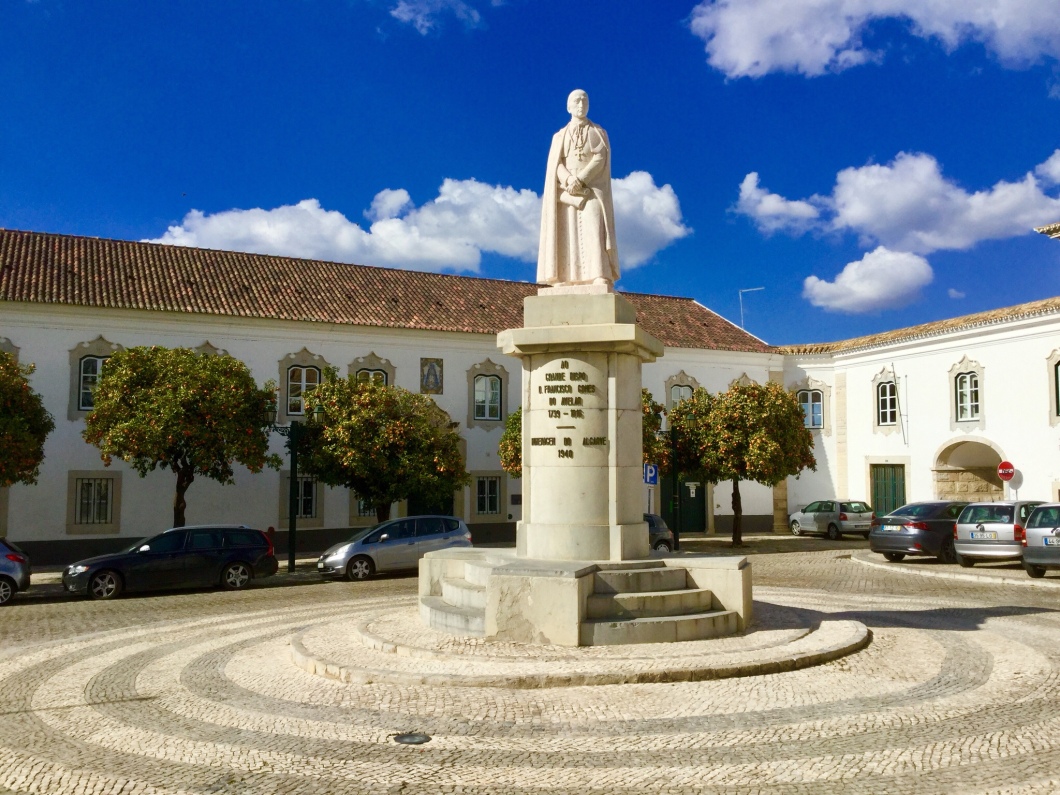 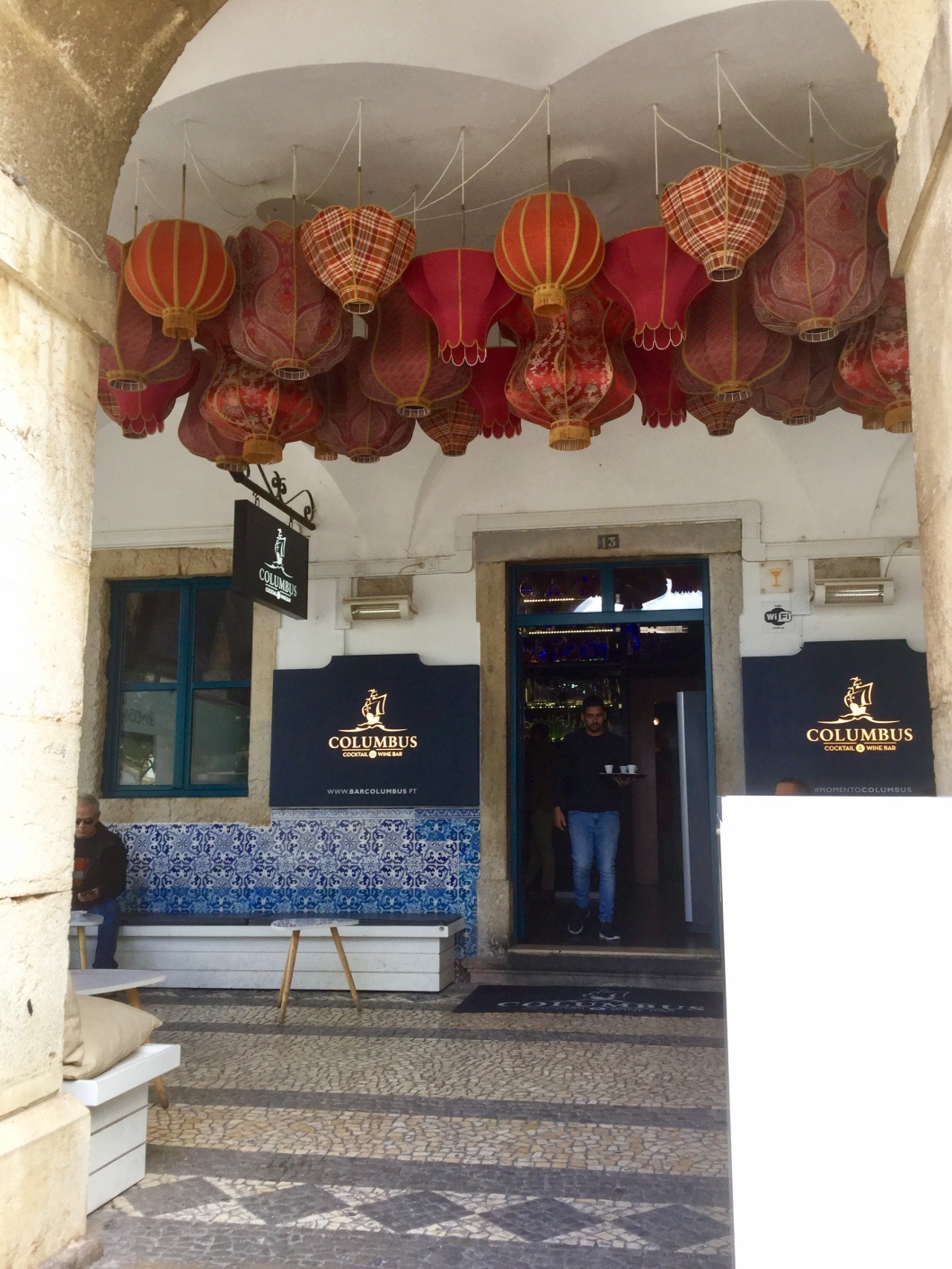 The Portuguese have a thing about hand-shaped door knockers. They represent ‘the hand of Fatima’ and are thought to protect your home against evil spirits and Jehovas Witnesses (ok I lied about the last bit).

Headed back to the van late afternoon after a fab day. Mark and Tony had a few beers and put the world to rights whilst I cooked up a curry. Bike ride tomorrow so Marion and I can get a better look at the pretty flamingos, sure there is a song in there somewhere!

Time to turn in for the night – heating is on, it’s flipping cold in Portugal tonight!

My verdict on Faro is……..well worth a visit. I didn’t fancy it, I won’t lie BUT it has a lot to offer. Great beach, fantastic nature reserve, even if you’re not into bird watching you will love the storks and flamingos and a wonderful old town. Plenty of shops in the new town too if that’s your thing. My shopping privileges have currently been withdrawn so today didn’t afford me such luxuries!! Faro? It’s a yes from me!

PS. Update on Faro! The walk through the Nature Reserve on the Airport side of the Estuary is an absolute must. I’m not much of a twitcher myself but even I got the binoculars out. We saw Spoonbills, Storks, Egrets, Herons and Kingfishers but the absolute stars of the show were of course the pink Flamingos. Sundowners on the roof terrace at Wax should be made compulsory!! The burgers are to die for, especially the one with Brie and caramelised onion, salivating just thinking about it! The place is very hip and trendy and the staff are great. Do go! 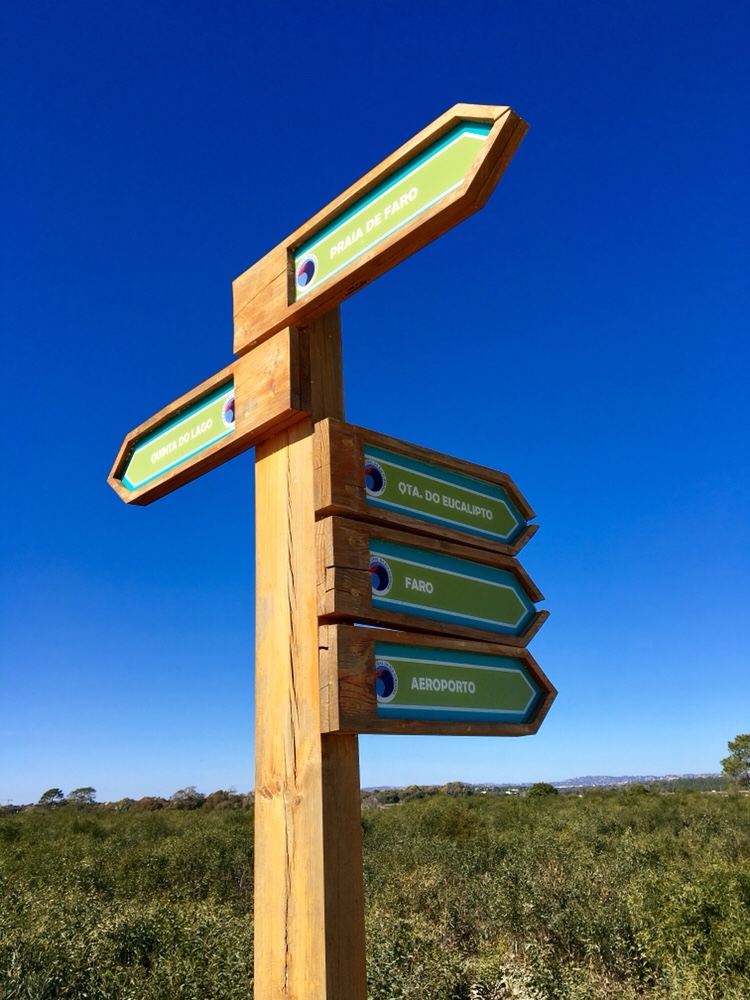 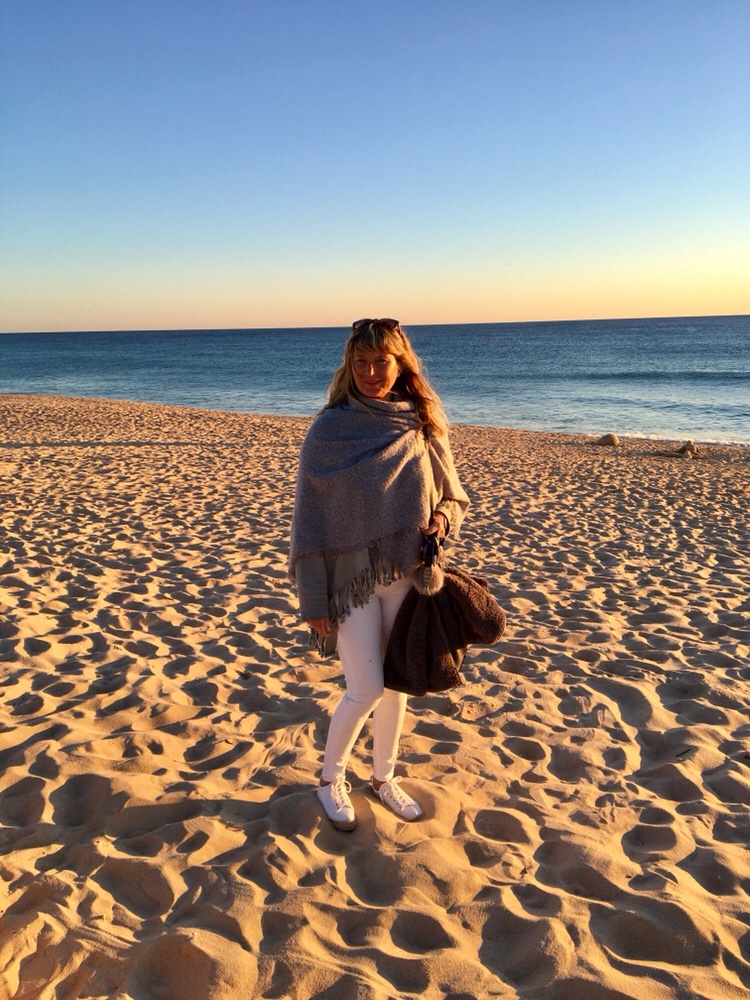 Just got to get back over that blimmin bridge now without the cops seeing us!! Come on Wadders, get your foot down!